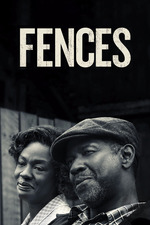 There - saved you about 2 hours and 20 minutes.

Fences is just way too damn long. I was completely on the fence about whether I liked it or not (hahaha - get it?), more so than with almost all other movies, but I'll say that I liked it more than disliked it, so I hope that explains the orange heart. I’ll give it credit for never being boring, but I felt every last second of its runtime. Surely the middle aged women behind me constantly tapping my seat and chatting throughout didn’t help, but it probably had more to do with the bleak subject matter and lack of plot. I was probably missing the point of the movie the entire runtime too, despite it being in the title, and it being practically spelled out by at least one character.

It’s also just hard to watch Denzel Washington's character at times. He’s a prick of a father and an equally terrible husband, who certainly has a point to all of what he's saying, yet entirely misses the point each and every time he thinks about something, does something or opens his mouth and blurts out something. And despite all of this, he has enough confidence or bravado to make up for a worldwide shortage. The older I get, the more and more puzzling it seems to me how confident some men can be, despite so clearly being subpar in most aspects of life.