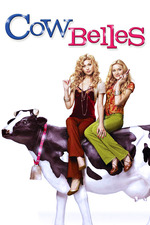 It’s ironic that Disney—basically a monopoly of hoarded wealth and power—attempted a Marxist critique in this movie...but that’s exactly why it’s so shallow and out of touch. On the surface, Cowbelles seems to promote a socialist agenda of wealth redistribution, an agenda against the materialism and greed of the rich. Yet in reality, the film is about two rich girls who save the day—allowing their father’s employees to pay rent, tuition, etc.—which communicates that working class people cannot function without the aid of the upper class. In Marxist theory, the working and upper classes are codependent, in that one cannot exist without the other. While Cowbelles definitely illustrates this relationship, it frames it as positive; it proposes that the bourgeoisie is benevolent and that the proletariat can thrive only if it maintains faith in the generosity of its superiors. Furthermore, a few workers air their grievances about the broken promises of the upper class, but, in the end, the “harmony” of the capitalist hierarchy is restored when two rich girls and their daddy save the day. They manage to galvanize the wealthy cotillion guests into working to save the dairy company and its workers, but, in reality, rich people who derive comfort from their socioeconomic status aren’t going to help anyone they perceive as beneath them. Capitalism would not still exist if powerful people ceased to benefit from and find protection and ease in its system’s rigid duality of loss and gain. In a true class revolution, the proletariat would be organizing; here, the bourgeoisie’s one-time efforts almost serve to silence any complaints from proletariat—to distract from the reality of a working-class revolution. Cowbelles, moreover, follows the emotional arc of two rich girls as they, for the first time in their lives, have to labor and have temporary financial limitations, and this experience of “poverty” is used to emotionally link them to the minor characters who work at their father’s factory. But they will have their wealth back someday; they won’t need to work and be frugal forever. The proletariat, under the design of capitalism, will remain oppressed and exploited; the workers whom the girls “save” will continue to have financial struggles, both at and beyond their jobs at the dairy factory. The girls’ emotional connection to the proletariat is shallow—they don’t and will never truly understand the experiences and struggles of the working class. This is a bourgeoisie savior film, and, while I know not to expect anything from Disney, I’m still disappointed upon reflection. Yeah, it’s a fun rewatch—there’s a pregnant cow and her subsequent labor (Aly Michalka hugs and kisses the calf when it’s covered in slimy placenta or whatever) and lots of very characteristically 2006 Disney tropes (like the classic bitch-falls-into-pool cliché)—but just because something’s fun, doesn’t mean it’s issues should be ignored. I kind of want to turn this into an actual MLA-formatted Marxist analysis essay.