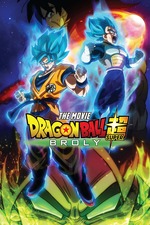 Few anime (if any) have had as much of an impact on mainstream pop culture as Dragonball. Goku and his pals have made a major mark on the world and as a long-time fan of the series, it has been awesome to see it make a return in the form first of the two movies Battle of Gods and Resurrection F beginning in 2013 and then the full series Dragon Ball Super which just recently wrapped up its run (or went on hiatus for a hot minute, we'll see what it calls itself when it ultimately returns). It's been even better that the series has made its return through original series creator Akira Toriyama, whose sense of humor has helped Super feel more like everything that makes Dragonball what it actually IS than any of the attempts to carry on the franchise without him after he ended Dragonball Z in 1995 ("but he worked on the Dragonball MANGA, and Z was the TV show, blah blah blah" - shut up. Same difference). It's interesting that for the first (only? who knows) movie to be released under the Super moniker, Toriyama decided to make a return to a character he originally designed and conceived, but never wrote a story for, though there were already THREE (non-canon) movies in existence. Toriyama brings us HIS (canon) version of Broly and it's much MUCH more satisfying than that of the previous attempts.

41 years ago, as King Vegeta III ("OUR" Vegeta's father) is beaming with pride over the forthcoming birth of his son, and the high latent power level the child holds, an alarming chain of events takes place. First, King Cold appears on Planet Vegeta with the Cold Force and announces that he is stepping down as ruler of the universe, and handing the reigns over to his son, Frieza, a brash, impetuous, disrespectful creature whose ruthlessness far outweighs that of his (already quite ruthless) father. Frieza demonstrates both his power AND his ruthlessness by killing several Saiyan warriors utilizing his new scouter as a means of demonstrating their capabilities, forcing King Vegeta and the other Saiyans to bow to him. Second, a Saiyan child with even MORE latent energy than Prince Vegeta is found, though his power spikes show he may be unstable. King Vegeta, both too proud to admit someone may be more powerful than him or his son (wonder where Vegeta gets it from) and scared that the child's power level may draw too much attention from Frieza and ultimately lead to their destruction, exiles the child to a remote, uninhabited (by intelligent life), desolate, dangerous planet, known as Vampa. THIRD, in a rage, Paragus, the boy's father, confronts King Vegeta, and ultimately steals a spacecraft to head to Vampa to attempt to rescue the boy, vowing vengeance on Vegeta now that he and his son are excommunicado. FOURTH (flash forward a few years) Bardock, a lower class warrior, becomes suspicious when Lord Frieza summons all Saiyans to Planet Vegeta for "something." Bardock knows Frieza can communicate via the scouters across the vast expanses of space, and, distrustful of the evil overlord, sends his own son, Kakarot, to a remote planet, though a much more hospitable one than Broly.

From here, Dragonball faithful know what happens to set things in motion: Kakarot lands on Earth where he becomes known as Goku and flourishes under years of intense training and battles. Frieza destroys Planet Vegeta and wipes out the Saiyan race with the exception of Goku, Broly (and Paragus), and Vegeta and a few other Saiyans with him (namely Raditz and Nappa) as they were in the middle of a conquest and could not return for Frieza's summons. Vegeta languishes under Frieza's rule, becoming ever stronger in the hopes of one day escaping his master's torment, ascending to the level of Super Saiyan and restoring the Saiyans (all....six or so of them left) place in the universe to the mightiest race. And we all watch all this unfold over hundreds of episodes of Dragonball and Dragon Ball Z, and then later Dragon Ball Super.

Unfortunately for...well...kind of everyone, Broly survived his exile on Vampa. The harsh environment and gigantic predators made it difficult, but the boy's latent power level made him strong enough to kill the creatures and continually grow stronger. Also, despite his extremely remote location, the Frieza Force, their numbers having been depleted to a mere fraction of their original size after their various encounters with Goku and Vegeta, are now scouring the remote reaches of the galaxy, in search of anyone with halfway decent battle power. That's how two members of the Frieza Force, Cheelai and Lemo come across the disabled spacecraft that Paragus brought to Planet Vampa, and rescue Paragus and Broly, bringing the two Saiyans to Frieza himself. Broly is unsophisticated and uncultured, but Paragus knows where his bread is buttered and recognizes the opportunity to join Frieza and get revenge on Vegeta for their exile. Though King Vegeta may be dead, Prince Vegeta lives and could serve as a worthy dish for Broly to feast on for vengeance.

Though Broly is aligned with Frieza, in so far as he mostly just follows Paragus' orders, he also has a tendency to fly off the handle and become an uncontrollable rage-fueled nightmare monster whose power level spirals upward the more his rage intensifies and makes him incapable of logic, reason, or any thoughts beyond "kill." This cold pose some particular problems, considering Frieza's only condition for Paragus and Broly is "don't kill Goku, he's mine to deal with," and also a somewhat unspoken "don't attack me, because I'm your master."

The stage is set.

Dragon Ball Super: Broly is an extremely satisfying experience for anyone who can read my above synopsis and understand things like "Saiyan" and "Super Saiyan" and "Frieza Force" and "Prince Vegeta" and "scouter" and still care about any of the words in those sentences. For others, it might run a little too fast and leave them behind. That said, I don't know what maniac would come to a movie like this with no knowledge of the franchise, so to be quite crass, fuck 'em.

There are a couple things Broly doesn't do well. One, and this being one of the few that couldn't make this movie retroactively better by expanding on in a full arc via the anime series, is that there's a chanting during the fights...but it feels less like a chant, and more like just...some guy shouting character names and moves angrily. It's a poor choice and distracting, making the overall soundtrack suffer. Also, and this might just be my inner Vegeta-fan talking, Vegeta disappears for like 10 minutes in the middle of the film. He isn't knocked out or anything; Goku steps forward, says "It's my turn" and then Vegeta just doesn't even react or do literally anything until he rejoins the fight like ten-fifteen minutes later. Finally, there's a moment where something...crazy happens that leads to a wild visual, and one of the characters even comments "what the hell?" and it's never brought up or mentioned again. It's frustrating when character like Whis are standing around, watching, because a character like that basically exists just to explain the crazy stuff that happens to us. It'd be the equivalent of Whis turning back time, but never explaining it. Ultimately, the visual matters more, and there are enough potential explanations for the moment that pop into my head easily without having an actual explanation, but it's still something I would have PREFERRED to exist beyond just the visual. Also, if you're a fan of characters other than Goku, Vegeta and Frieza, then too bad because Piccolo and Beerus make cameos, essentially, and Bulma and Whis witness the fight, and that's it. It didn't bother me, but it bears mentioning, I suppose.

Those few issues aside, as I said before, the movie is extremely satisfying. The battles are fierce and fast-paced, and despite essentially the entire second half of a 100 minute movie being a battle, it never really feels like it's getting worn out or boring or tiresome. There's always an escalation, and an ever-increasing tension. Also, the humor is on-point. There's a bunch of it sprinkled throughout, but particular highlights include baby Prince Vegeta, Piccolo's cameo scene, Beerus getting stuck as babysitter for Bulla, and a GREAT moment of dark humor from Frieza, who continues his arc from Super, is essentially the character he was during the Tournament of Power, and might be becoming my favorite character. Frieza is no longer JUST the ruthless monster who aspires to be the strongest being in the entire universe, he's also got a dry humor and a sarcasm about him, very similar to Vegeta when he was in his transitional period from villain to hero (though Frieza isn't about to become a hero, he's still a villain through and through). Continuing in the "tradition" of Super, Broly is an antagonist rather unlike those of Z, whose ambitions were always to conquer and kill. True, once the fight breaks out, and he goes berserk, Broly doesn't remotely hold back, but he's not trying to take over the world or universe: he's ALMOST the victim. It's a refreshing approach for a series that has so many trappings to become stale.

All in all, Dragon Ball Super: Broly provides plenty of thrills, amusement, charm, and the hallmarks of Dragonball to be a totally satisfying experience, with just enough little twists and surprises to make for a unique and expansive entry to the franchise. The movie whets my appetite for this to be expanded on as full arc in the television series and provides some excitement for where things head after these events, as the status-quo of the universe may be forever changed. I had an absolute blast.