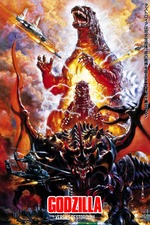 The Godzilla series comes full circle with an event movie that not only concludes the continuity of the Heisei era but also pays tribute to the 1954 original.

At the time of release in 1995, this was promised to be the final film in the series and one in which we’d see Godzilla die. As such, it’s thematically satisfying that the big baddie is birthed from the same chemical weapon that killed the original Godzilla in 54.

The film loops back to its 40 year old predecessor in a number of ways, including surprised return actors, new characters directly descended from the original cast, on-set photos of its lead players and even a cleverly recreated set.

It’s fun to get all these call backs in a series that’s traditionally loose with continuity but, even better, the film takes the opportunity to explore some of the more serious themes too. Nuclear fallout from a dying Godzilla is the key threat of the film and many of the characters find themselves pondering their own role in the tragic events. When the doctor tasked with recreating the Oxygen Destroyer technology says “I’m not a mad scientist!” you get the impression he doesn’t quite believe himself.

Sadly, these themes aren’t quite explored as thoroughly as in the 54 original and they get lost or forgotten by the mid section of the film where the tone shifts to dark and gruesome horror. The second act in which several mini Destroyahs attack Japan sounds good on paper as an action hybrid of Jurassic Park and Aliens, but a cheesy monster design and some wobbly effects, including the use of actual toys for miniatures, undermines the impact of it all.

Still, Godzilla Vs Destroyah redeems itself in the end with a beautifully shot death scene for the big guy himself. Akira Ifukube returns to score the movie one last time, and his theme for Godzilla’s death may just be his most accomplished and moving composition ever.

Godzilla Vs Destroyah isn’t the best film of Godzilla’s Heisei era but I admire how it pulls together the loose plot of the films before it while also serving as a celebration of the entire saga. If this had truly been the last ever Japanese Godzilla movie, it would have gone out on good form. But I’m glad it wasn’t!