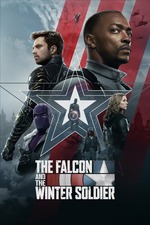 “We built this country, bled for it. I’m not gonna let anybody tell me I can’t fight for it.”

Somehow a series that’s less creative and experimental manages to be better than WandaVision, and this may be for personal reasons. The Captain America series in the MCU has meant a lot to me in that it basically proves that superheroes can exist, good people can exist. Now a lot of you know that I heavily dislike Zack Snyder’s Superman, in that he just feels widely wrong and just bleh, so when it came for a substitute the MCU’s Steve Rogers was there. They didn’t change his character, they didn’t modernize, they followed what made Steve Rogers Steve Rogers/Captain America, and somehow made the perfect hero more relatable than the depressed god. So when it came to this series coming out I was looking forward to it, especially since I knew this was the series where Sam Wilson was finally gonna be Captain America, and I couldn’t be anymore happier. The series as a whole is the most grounded MCU project I have seen in a long time, ever since Civil War or I might go as far as The Winter Soldier. So seeing this in the MCU was very refreshing, I liked the scene that had just these characters talking - fleshing out characters that were once considered side kicks to the main characters of their story. From Sam Wilson taking in the mantle as Captain America in a world that would most likely reject it, to how The Blip effected the world, and Bucky’s battle to come terms with his last self - it’s all there and it’s told really well. Especially with Isaiah Bradley, who was the first black super soldier - his story arc was easily the best part of the entire series and was easily the heart of it. This series does the issue of race, and other political topics so well without getting too hand fisted it’s definitely when the series shines. John Walker as a character is really interesting, it is no secret that people ended up hating him (even to the point of threatening the actor Wyatt Russell who plays him magnificently), but you do get a sense of understanding of where he’s coming from. It shows that the shield really can be something hard to live up to, and all in all how America try’s to build there “perfect soldiers” like John Walker. I’m glad he didn’t end up being a racist asshole which they could’ve easily gone that route, but instead chose to build a actual complex character that has a complicated ideal of what it means to be Captain America. Zemo - my favorite villain of the MCU - makes his return and he’s better than ever, I loved him, he was perfect, I hope to see him in more projects because he’s great ... so yeah. The writing and the characters is this series greatest strengths, however the action can be a bit basic spy thriller ish which I don’t mind, but they could’ve made a bit more creative action set pieces. The one thing I can definitely say is my least favorite aspect is the Flagsmashers, Karli and her little are the most dull and boring antagonist I have seen in the MCU so far. The Flagsmashers are a group of these terrorists that got the super soldier serum, and they claim that the world was better off during the Blip - claiming that humanity was more United and peaceful them. That’s cool and all, but we never get that other side, we never fully explore Karli as a character and get the basic stuff. If we saw a scene of her during the Blip, in a more positive light - because if I recall in Avengers: Endgame those days looked depressing and tragic - then I would understand, like give me flashback in which we see Karli and her friends living what they deem a “better life”, and then all of the sudden people start reappearing and chaos occurs. The series tries so hard for you to understand her, but she also a murderous terrorist that blows up a fucking building. I understand her beliefs, that the people in charge ignore her and treat her like nothing, but I don’t understand her actions in doing so. Also Sharon Carter as the famed Power Broker was a weak twist, I get why she became the Power Broker but I saw that shit coming from a mile away c’mon man. All in all I think this a great series, it’s better than WandaVision imo, and it speaks so much more - Sam Wilson may be a new favorite of mine as well as Bucky, I can’t wait to see these two again in a second season or in an entirely different project. This series definitely feels like it honors the idea that is Captain America, and I mean I am so fucking happy for that.

Series: The Falcon and The Winter Soldier
Grade: A-

the animated jem liked these reviews

the animated jem is using Letterboxd to share film reviews and lists with friends. Join here.