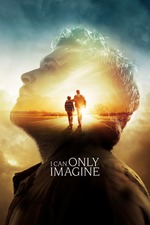 I Can Only Imagine

I went to see I Can Only Imagine at the theater today with my parents. I had not originally planned to see it because even though I am a Christian, there are a lot of "Christian films" I can't stand. At best they have tended to be cheesy and poorly done. At worst their theology is so terrible I want nothing to do with them.

The first big exception to this for me was the movie version of "The Shack" last year. I can get behind the theology in that movie and I felt like it was fairly well done.

A lot of my friends were saying great things about "I Can Only Imagine", including people who are big movie buffs and don't like the cheesy Christian films either. So I decided to give it a chance. And I'm glad I did. Everyone I've heard talk about it was right. It was really well-done. And it is a very moving story.