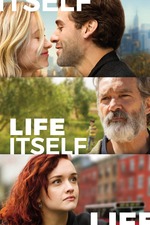 I chose to go see this movie, despite some negative buzz I had heard, because I love Dan Fogelman’s tv show, “This is Us”.

Unfortunately, I think the overwhelming number of negative reviews have merit. I HATED the beginning of this movie. I thought it was really weird (and annoying) with the first narrator and the starts and stops and misdirects. I was finally starting to get into the story of it all when the first “chapter” ended so abruptly and tragically and at that point, I thought I was going to hate the entire movie. (There are five “chapters” in the movie, six if you count the prologue with Samuel L. Jackson narrating.)

Pros:
- I actually liked all of the literary and philosophical reflection on unreliable narrators
- The storylines in chapter three and four with Javier and Saccione (played by Antonio Banderas), Isabelle and Rodrigo
- The acting was good, in spite of the story they were given.
- The dog’s name made me laugh.

Cons:
- Did I mention how much I hated the beginning of this movie? And the way the first chapter ended? Demented and morbid are fair adjectives to use here.
- Convoluted, emotional whiplash, overwrought, emotionally manipulative, depressing... these are all fair descriptions of this movie.
- The timeline was very confusing. I think we start out in the present day, have flashbacks to when the husband and wife from the first chapter met in college, and then the chapters that follow cover a lot of different time frames going forward. One review said sections of it are set in 2037 and 2079, but it all looks the same.
- The whole movie is mostly about death, and therefore pretty depressing.
- I am highly sensitive to violence, blood, and gore, etc. I don’t understand why they had to make this an R rated movie and show that level of blood/graphicness at different points. They could have made the same movie with all the same plot points and kept it PG-13 on those things.

Overall I didn't necessarily hate the entire movie, but I didn't really like it either. And I definitely wouldn't want to watch it again.

Sierra Burgess Is a Loser