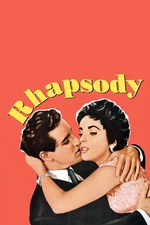 If you wanna see two hot people and one creepy dude have minor relationship drama that snowballs into some legit craziness then have I got the movie for you!

Vittorio Gassman plays a handsome violinist who would rather spend his days practicing his instrument than lounging around in the throws of love. Liz Taylor is just the opposite of course, as a rich girl who desperately wants him to put that silly violin down cause music is boring anyhow. Somehow they’re both in love still.

Honestly if Liz could just get a single solitary hobby I think this all woulda been straight forward and fine. But instead she chooses to play weird games and punish Gassman, who is quite frankly pretty rude to her and ends up being a real creep about breaking up. Well she one ups him by marrying her stalker neighbor like a day after she tries to kill herself.

She decides the best way to win Vittorio over again is to patiently listen to her new creeper husband practice piano for 800000 hours until he’s a virtuoso in his own right. Great, really nice. Just use this bozo as a stepping stone so you can divorce him later. That’ll make him love you. What was that? Oh, it does? What a buncha attractive jerks. Though in the end Liz sticks with her creep husband because she put the effort in. Wrong call lady, but kudos on growing a heart.