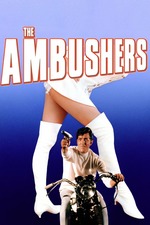 I had such high hopes for this one — I mean it features a straight up UFO and levetation ray guns — but alas, they dropped the ball on fun for a rather boring plot and some creepy implied rape scenes. Not even a pool dunk at the end.

I will say, this DID offer a fully inflatable “camouflage hotel”, aka a military issued bouncy castle, swims in giant vats of beer, the dopiest ‘jazz’ ripoffs of both Spanish Flea and Telstar I’ve ever heard, a living alligator in the sidecar, an Oleg Cassini fashion show, no woman fully clothed, and Dean Martin wearing a lot of turtleneck sweaters in Mexico while looking sunburnt to a crisp. I was also impressed at how this movie “invents” digital cameras and wearable machinery to help lift heavy things. It’s Matt Helms future and we’re just living it in!

I don’t know if the novelty is wearing off or if this was just the most boring of these movies. Remains to be seen with the last one I suppose.