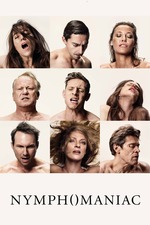 Lars von Trier continues to surprise us with his extremely thought provoking experiments. His latest film Nymphomaniac, which after my opinion is the best von Trier film since Dancer in the Dark is a pure genius creation. It's not a straight narrative, it's more like a movie montage beautifully pasted just like the early Soviet montage films of the twenties, knowing where to hit the spot. I would have thought this would be a depressing grand epic, but it's the opposite, it's actually a dark comedy that jokes about human sexuality and all the taboos surrounding it. But there's also the presence of god that really makes this film a real treat and a film I can ramble about for hours. I try to keep it short in this review.

This is indeed another of von Trier's misanthropic adventures that shows us that there's no hope for the human race. As Joe one times says "Everyone is a hypocrite", because everything in this movie is unpredictable, there's always a different side to each character, a good and a dark side. I also love that Joe's narration of her stories sometimes get interrupted and paused by Seligman who tells another short unrelated story that Joe are able to incorporate into her own story and therefor create a symbolic story.

Like when Seligman tells Joe about the west- and eastern-churches. That the eastern orthodox church paintings would focus on the tenderness and love of christianity, while the western roman catholic church would focus more on the passion and suffering of Christ. With this information Joe makes parallels to her own sexual experience, by referring to one happy period and to a suffering period, which represents the eastern and western church respectively.

As most of his other films, Nymphomaniac have an extreme religious overtone, and what I love about von Trier's films is that you can't deny the presence of an almighty power. At the same time he criticize the foundation of religion. He's movies are militant agnostic in that way that it can satisfy both sides. This movie even implies that you must compare religion with sex. Like religion, sex can be a good thing or it can be used for evil, and one can do the most horrific things in order to get satisfied. But not having sex at all is impossible for most people. Like the existence of god, different sexual desires are impossible to explain, but it exists.

I also love the montage style of the film. It features a lot of old footage to over-explain and joke about what's being told. But there's also a very beautiful split screen scene where Bach is being played in the background. In some scenes letters appear on the screen and counts all the humps during a sexual act. Joe does in fact have a categoric system of all the different sexual positions and different kinds of people and their sexuality. She knows everything. She's the master of sex and she's proud of it.

Even though Nymphomaniac has been categorized as a drama, I would rather call it a dark comedy. I would say I laugh during one third of the movie. Some of the scenes are even made for comic effects in the style of comedy. I guess it's because of the irony of human sexuality and all the taboos against it. But don't prepare yourself for a comedy, because the sex scenes in this film is indeed very graphic, and some are very disturbing, like the sadomasochist scenes in which Jamie Bell out of all people are in charge of the punishment. In other words, I totally understand if people feel uncomfortable with the whole film. For some it might be as inhumane as Pasolini's Saló.

In my defense, Nymphomaniac is structured like a comedy, unlike other films that have been labeled as "dark comedies" such as Happiness and Dogtooth where I didn't laugh at all, it was just disturbing and nothing more. But then again people are different. But the fact that this one made me laugh more than any other comedies last year did, makes it a comedy or am I just a bad person? And it's hard not to laugh when you already know all the porn references (I'm guilty in that charge) like when Joe is telling two men about her dead hamster. It's in other words repeated material that one already knows, and yes there's much horror in the world, but you gotta joke about it sometimes.

I loved the performances in this film. As always since the beginning of the century von Trier's film features an international cast. Charlotte Gainsbourg and Stellan Skarsgård does a marvelous job once again. But there's also beginners such as Stacy Martin playing the young version of Joe who's truly wonderful and with so much dedication in her work, and I hopes she have a good career later. Shia LaBeouf really surprises us in a great performance that's really a step up, with a british accent and everything. And it wouldn't be the same without Udo Kier in a cameo performance. He's the cherry on top of every von Trier film.

Let me summary Nymphomaniac this way: You can be disgusted by the whole thing, or you can just accept that humans are not perfect and look at it as a comedy about humans. The aliens would have laugh their asses off. It's indeed a thought provoking film, in which you can discuss everything from moral society to the existence of god and even compare religion to sex. It's also a very beautiful film with great use of montage editing and a great cast. Certainly my favorite Lars von Trier film right after Dancer in the Dark. Thumbs up.