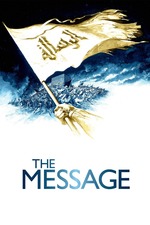 After a countless films about Jesus Christ, the prophet in the christian faith, we have to ask ourselves, has there ever been a film about the prophet of the Islamic faith, Muhammad? Yes, there is, it's titled "The Message". But since Mohammad is such a holy figure, he was not to be shown on the screen. The story is told through his uncle, Hamza (Anthony Quinn) and his other followers. But there's some scenes where people speaks directly to the screen. We know that they are talking to Mohammad, and the camera is his point of view. The camera evens nods and moves around like a human being walking around.

The Message is a very good epic, which gives us the essential story of how the illiterate merchant son, Mohammad, received his first revelation in a Cave of Mount Hira. Where god gave him the words of the Quran, and asked him to spread the words and covert all the non-believers. But in Mecca the Quraysh tribe is still in power, and sees Muhammad as a threat, and he flies Mecca and goes to Medina, where he increases his followers. But the Qurayshs is willing to do everything to stop Muhammad's new religious movement, and starts to attack him regularly, while Muhammad does as good as he can, not to spill any more blood than necessary.

The director, Moustapha Akkad does a brilliant job of introducing us to a relligion that most of us doesn't actually know very much about. Except for all the negative aspects that has been made up by the western media, involving terrorism and sharia. Instead The Message gives us the basics of Islam. like, what's the reason people turned to Islam? How did the Paganist ruled Mecca? I think Akkad made the right decision to make this film. I don't mind that we don't see Mohammad on screen. It's only makes the divine present of Mohammad even stronger. But I still love Jesus after seeing him portrayed as an ordinary vulnerable man in "The Last Temptation of Christ" and "The Passion of Christ". The fact that he was an ordinary man with doubts, makes him even more impressive. The facts that he actually was so brave that he actually conducted his father's wishes.

I'm not saying that Jesus Christ is better than Mohammad, all I'm saying is that if you add more depth to your character, the more you empathize with him, the more you grow found of him. I know I'm on dangerous ground here. Other things besides this is that this is in fact a historical epic, with the right tone, the right actors, but after my opinion it's an average looking epic. It doesn't over come Lawrence of Arabia, for instance. But overall it's a good film that shows us how Islam was founded, and why it become so popular. And watching this movie convinced me that Islam in basic is in fact a peaceful religion, that encouraging non-violence and dialogue, and there is some pretty good dialogue in this film. I also loved the ending, showing clips of all the Mosque players all over the world, showing the spread of Islam. I think I stop here by saying "We are all Abraham's children". Thumbs up.