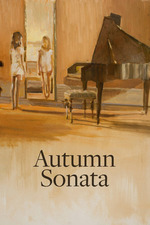 Autumn Sonata, a stunningly accomplished chamber drama from Ingmar Bergman, is relaxed as often as it is austere. Set mostly in a country home, the film essentially has three speaking parts, and the real crux of the film revolves around only two of the characters, an emotionally and physically distant mother and daughter. Played respectively by Ingrid Bergman (as Charlotte) and Liv Ullmann (as Eva), the two actresses give phenomenal performances. After seven years apart, the death of Charlotte’s longtime companion prompts Eva to invite her to her home, and the film observes the way that the physical and temporal distance from their relationship has in no way dulled the acute feelings that they have about each other.

Watching a good Bergman movie is like being thrown into a psychic vortex. The way that the director uses the screen to represent the state of mind of his characters is truly unparalleled. His camera stresses the unspoken but rarely appears to (notice the camera’s slightest recoil when the mother and daughter embrace in bed). His close-ups are held for inordinately long periods and the emotions that wash over the face of his actors have a genuine complexity and depth to them. They don’t often say exactly what they are feeling, but we understand implicitly. Everything that we see is intimate, but there are even more layers suggested that are never revealed. In some of her writings, Eva mentions that she values feeling without sentimentality, and that's precisely what a Bergman film provides.

Much of the film feels like a condemnation of Charlotte, who was more devoted to her work than her daughter, and it’s shocking that Bergman would be so one-sided. It’s quite apparent that the scars of Eva’s childhood haven’t been left behind. Some of her complaints, while essentially valid (a mother should be perceptive toward her daughter’s feelings), seem a bit unfounded (an adult should be able to accept that her mother is human as well, foibles and all). As Eva continues to eviscerate her mother for her neglect, the audience’s resentment toward Eva builds up for doling out the punishment, making us better understand where Eva’s coming from. The film doesn’t exactly take sides, but there is the feeling that Charlotte, who did have an affair, is getting a bum rap from a woman that claims to be incapable of love herself, yet is married. We certainly can acknowledge Charlotte’s guilt, but this war being waged on Eva’s home turf feels a bit unfair.

It’s to Bergman’s credit, then, that the last two minutes completely dispel any such complaint. With striking economy, the film suggests there will be a winter to follow this relationship’s autumn, and if the tone isn’t exactly hopeful, it’s certainly open to the possibility of hope. Impossibly pretty, the film is shot by Sven Nykvist in autumnal hues and impressionistic lighting with flashbacks that look more like animated paintings than mere sets. Bergman’s technical brilliance is subdued here, allowing his actors and script to leave the biggest impressions. If the humble Autumn Sonata ultimately lacks the sheer power of Bergman’s similarly constrained Cries and Whispers or Persona, it is only because its admirable earthiness needn’t resort to the former’s transcendent leaps into the supernatural and the latter’s narrative explosions.