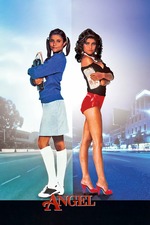 Though there's much to admire about a fifteen-year-old girl whom lives in an apartment on her own in Hollywood, CA, (which, according to my eyes, has the biggest bedroom in 90028), has convinced the administration of the private school she attends that her mother is bedridden (rather than absent due to abandoning her daughter), and commands high prices as a sex worker along the Walk of Fame, "Angel" doesn't add much more to the viewing, besides references to necrophilia. It's not very energized, suspenseful, nor inadvertently funny.

But, because I used to live on Hollywood blvd./Orange Ave., I loved seeing my old neighbor in an even older form. The shots on Highland Ave. brought back many memories.

For a better film about a public school girl carrying her own as a sex worker, watch "Malibu High."

The Horror of Party Beach