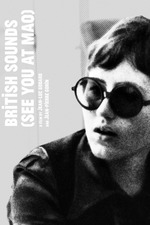 A fist punches through a poster of the Union Jack.

A production line in an automobile factory is shown slowly by a shot tracking from left to right. It's the document variant of the line of cars leading to a pileup of destruction in Jean-Luc Godard's "Weekend." As production commences, a narrator outlines the Marxist critique of wage labor and bourgeois culture. The smiles and joys of the men at work are on display, as the audience is told about their alienation and predicament. This must be false consciousness. The scene is intercut with inter-titles of red and black colored words. Sound is intermixed too: the tones of the factory, voice of the narrator, and the education (indoctrination?) of a young girl by an older man whom has her repeat his assertions about the state of the working class. The child of the next revolution, the pedagogy of the French New Wave.

A nude woman walks around her apartment. We see her bare body, it is emphasized and de-dramatized. Another variation of Godard's ladies as seen in "Contempt" and most especially "A Married Woman." Another woman narrates the gender disparities between men in women across society: domestic life, the workplace, the spiritual space. The man and child continue their inter- existence as speaker and human playback. Inter titles depict the formal deviations of words and color.

A conservative authoritarian, camera directly upon him, speaks against the rebels, the hippies, the students, the upsetters of social order, those who'd undermine British institutions and respect for authority. Intercut are images of working people on the streets and fields. Narrations continue.

Real workers in a small room discuss their work experiences, its affect on home life, and one speaks of the need for a communist party for the working class in Britain. It is the rhetoric of the main narrator in the form of a real human body, documented in real time. Inter titles persist, the child learns more from her educator. Marxist recitation.

Artists in a room create political art. Instruments of portraiture and music are in their hands. Posters are crafted. Inter titles show new words and shapes. The man and child continue. The assertive narrator makes more declarations about the means and ends of Marxist art. The bourgeoisie is called out, again, for the "self-evident" truths it presents in its art and culture. The revolutionary artist of the working class—the ones educated by bourgeois students, I mean—must challenge this capitalist aesthetic with form-defying imagery. The visual-auditory mechanics of truth must be laid out, for it is always a presumption in commercial entertainment, those spectacles consumers experience when they're not reading political philosophy.

A bloody fist lays in the grass. Revolution against counter revolution is narrated. The dictatorship of the proletariat must become ascendant. Several fists break through the Union Jack yet again. Victory and bloodshed. Art and labor overcome the society of nation and property.

Again, agitprop. This is confrontation, a work presenting ideological declamations, conclusions after the analysis, all framed as an unstable form where meaning doesn't come easily. It's not a documentary seeking clarity, but a document portraying the precariousness of truth through an artifice of diminished comprehensiveness.

We may wonder who the audience for this is. Does it help anybody learn about Marxism? Would consumers untrained in the distinctions of form and content have much interest for this? What could they learn, exactly? Do industrial laborers, many of whom have no preference for the philosophy of aesthetics, learn more about collective bargaining and labor freedom through a discourse by art students? Or, is this entertainment for the Marxist and art maker; or, perhaps, a work to nudge the fence sitters partial to the rhetoric of the labor theory of value instead of the empirics of marginal utility?

The appeal is very niche. Its trajectory ends with a clique. It's not illuminating through argumentation or investigation. There are only statements granted as self-evident. Not unlike the movies of the bourgeoisie, ironically.

Certainly, there's value in seeing Marxist agitprop, that art as a fulfillment of a radical ideology. Nerds of history and politics are familiar with these kind of projects mostly through readings of secondary sources, not the projects themselves. As a libertarian anarchist, I look to these creations of ideological opposition for greater understanding of the underlying motivations of would-be radicals. I also take inspiration in the notion that Marxists shouldn't be the only ones to expand the discourse with this adamantly artful approach.

Perhaps we bourgeoisie will no longer take for granted our entertainments and literatures (the Graham Greene polarity) and instead contribute a cinema of polemic. We already mastered advertising and a commerce that adequately supplies the demand for good drama (we don't plan for society, we respond to its spontaneity). Most other credible artists let audiences answer the questions of movies—let's take a note from Godard and try the other order: Answering questions an audience won't know we're asking, or ignoring questions altogether.

Meshes of the Afternoon