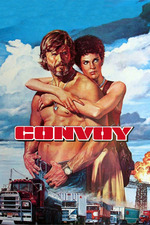 A weak Peckinpah film. It's a higher-budget borderline-exploitation riff on movies like "Smokey and the Bandit" and "Vanishing Point."

It starts off as a fun though clunky run-from-the-cops film, then becomes a contrived commentary on folk hero populism and political opportunism. The ethos is one of individualism, but poorly done and unconvincing. Characters make declarative statements that are obvious and thus risible.

There is a story here, but it's too overtly predicated on prior films and feels like a mishmash by creators who can't handle the content competently.

Plus, it's always disappointing to see a so-called individualist claim that a small town sheriff is also something of an individualist. This is a leftover rhetorical trope from the Western Mythos. Law enforcement strikes me as adamantly anti-individualistic. I wouldn't pit collective movements, like unionization and mass politics, against cops as a proper dichotomy representing the struggle of individualism. Cops are a gang too.