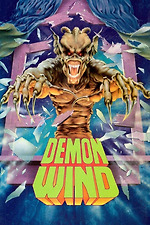 Apart from a well-delivered penis joke, "Demon Wind" is mostly tropey and illogical, though representative of a style that low-tier horror productions had circa 1990 (e.g., "The Curse," especially that brooding electronic score mixed with bluesy guitars, and gross make-up fx). I grew up with this style, so I enjoyed seeing it again, but not enough to buy the new blu-ray (which looks great, go Vinegar Syndrome). At least the characters are distinct and relatively mature compared to the usual youngsters that die in such stories. And some moments are genuinely enjoyable or creepy (that opening shot was a great setup for the ensuing letdown).

If you ogled the lenticular VHS sleeve from back in the day but never got to see the film, watch it on Amazon Prime. Don't expect to be blown away.