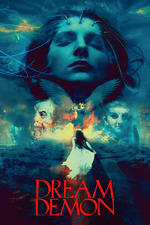 I don’t know much Eighties horror from the United Kingdom. This was the incentive to watch DREAM DEMON from 1988, which centers on the marital fears of Diana, an innocent bride-to-be, in the form of horrific dreams. Her engagement to a national hero who fought in the Falklands War also brings intrusive attention by two reporters from a tabloid. Their sleazy interest in her sex habits intersects with her own sexuality anxieties, be it about her fiancé’s desires or her lack of experience. She’s a neurotic prude who can’t settle into this changed life, which is exacerbated by the unexplainable happenings in her new home. That barrier between dream and reality might be gone altogether—but perhaps she has encountered a parallel realm where the past is hidden. She meets an American woman, Jenny, dressed to represent a night-and-day difference, who feels an ambiguous connection to Diana’s home. After Diana has a premonitory dream about the death of one of the reporters and faces familial concerns about her mental health, she and Jenny team up to find out what is really going on in this strange new place.

As expected, the mixture of dreams, reality, and the possibility of another dimension yield incredible visual entertainment. When the going gets weird, the lens takes on a wider curve. Angles become stark to maximize disorientation. Make-up and special effects create demonic characters and leverage disgust. In particular, actor Timothy Spall’s gluttonous photojournalist becomes the grotesque figure in the fore. He doesn’t reach for icon status, but his presence adds most of the character to the nightmares and terrors of another world. The connective tissue of these aesthetics with the film’s themes doesn’t bind strongly, but there’s enough relevance in it all these subjects to infer something meaningful.

It won’t take long for the average horror fan to see DREAM DEMON’s genes: HELLRAISER is dominant, A NIGHTMARE ON ELM STREET is recessive. Mix in superficial traits from POLTERGEIST and you have a genre film that mixes popular tropes with the particular reality of British life in the 1980s. The Falklands War hero and his patriarchal standards evoke the values of a nation presided by Margaret Thatcher. Diana dresses for the part of an old fashioned young wife, which makes her prudishness believable (though actress Jemma Redgrave’s pretty appearance may lend too much appeal to a style that reviles the revealing). Jenny is the punkish rebel, but her fashion might conceal something more, perhaps a link to everything in opposition to herself. The emphasis on scuzzy journalists seeking ravenously for lurid details appears at first to be a contrast to the moralism of the conservatives, but eventually the two mix to reveal the hypocritical truth of faux traditionalism. Indulgence, misogyny, abuse, and trauma underly this social order.

DREAM DEMON’s distinction doesn’t tread far from standard horror entertainment, yet a horror-holic isn’t likely to be disappointed. The cinematography is beyond competent and the pacing is on point. The performances are quite good too. It might not be the paragon of originality hoped for while exploring unfamiliar horror fare from another country, but it met my standard of satisfaction. I’d rank it in the top ten of horror movies from 1988. For maximum pleasure, get yourself some noodles to slurp for a snack while watching it. You’ll feel monstrous.

My Name Is Julia Ross