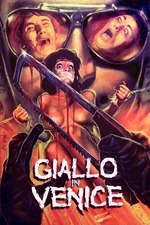 By 1979, a giallo producer thought it was time to show the vagina being stabbed. If you're going to rip-off "The Bird with the Crystal Plumage" again, go all the way. There will be a build-up with tense music, bringing the audience as close as possible to "wanting" to witness such an event, and the cut to the screaming face that signals the awful outcome...then cutting back to a prosthetic hip laced in a garter belt being stabbed repeatedly with scissors like unsimulated penetration in a roughie.

This is how nasty "Giallo a Venezia" gets. It's "The New York Ripper" without Lucio Fulci's name (or skill), nor the infamy. It's also a bit like "Island of Death," because somebody can't let the perverts live after all their debauchery, and they die in a climax of vicious sleaze. (This film, however, doesn't reach the heights of that A-grade exploitation classic.)

On the low-end of the gialli spectrum, "Giallo in Venice" doesn't have haute couture or bravura camera work. The plot isn't convoluted with annoying McGuffins or arbitrary red herrings, which is something of a relief, but it's revelation relies on a lame lie of omission, and the finale ends even more abruptly with much more left unsaid and unseen compared to many expedient gialli. Given the length, this is a bit surprising, until you remember how much time was spent on softcore sex. Those chunks of screen time are substantive, prolonging the run time for the sex demographic at the expense of an excitable thriller. Sexual exploration is a focal point of the film, so it isn't entirely unwarranted, but you'll be bored all the same.

The highlights aren't too dim. It has a brief but notable opening that's striking, like that of "Autopsy" and "The House with Laughing Windows." It's an excellent kill scene (during this moment I heard in my head Carmilla from "The Blood-Spattered Bride" screaming "Destroy his masculinity!"). The titular location, like Aldo Lado's "Who Saw Her Die?," is a welcome contrast to Rome and Turin. The police commissioner is so against type that the only hard-boiled quality about him are the eggs he snacks on in every scene (a good visual joke, I'd say). His fluffed blonde hair, white pants, and blue blazer make him fit for an Italo disco producer. His motif of confusion is an endearing feature of the film: the contradiction of apparent motives perturbs him in the same manner for every crime scene, a light comic counterpart to the gnarly crimes the cops discover.

And Berto Pisano saves yet another sub-standard giallo with his score. With this one he traverses the clichés of Morricone most of the time, but he adds a big band quality, which, depending on the action, can be bombastic or ironic. When a scene goes malevolent, the darker score is genuinely unnerving (I'm thinking of the discomforting sounds of his work in "Death Smiles On a Murderer"). These kills are effective in part from this score. But those kills—wow. Ferocity is surely an attraction for the giallo tourist, yet this film goes for the gorehounds. Not one act of violence fails to feel cruel. The camera lingers on a complete burn victim like a sensational PSA about playing with fire. A leg is amputated in protracted time, akin to H.G. Lewis with a budget and an inkling for saturated sadism. "Giallo in Venice" is a tough film, even for the jaded.

The heart of the film (it has one!) is the character Flavia, played by Leonora Fani. She's the perpetual victim. Her lover, Fabio, is a demanding sex addict. He wants her to perform all kinds of pleasures, whether he's in it at the onset, enticing others to watch or get involved, or seeing her at a distance. She's an angry plaything, frustrated by her objectification and the insensitivity of Fabio to her interests and desires. This is the terrain of the post-counter culture giallo: a non-conservative pessimism toward the so-called sexual revolution of the 1960s, learned by knowing the lack of consent of many sex experiments and the failure to take down macho power in sexual dynamics. The social pressure to fuck and be seen an a fucker without discretion led to many crimes and an ironic denial of individual preferences. There's a message here, but this is a willfully lurid film marketed to the pulp crowd and perverts. The cake has been baked and we're gonna eat it, regardless of how good it tastes.

The overall result is half-and-half, 50/50. Equal highs and lows. Only watch if you're a dedicated gialli hunter and you're skin is thick enough for the most grotesque exploitation.