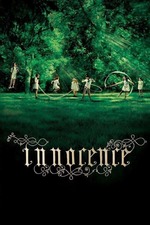 Lucile Hadzihalilovic, the director and co-writer of "Innocence," must've felt as I did after watching Peter Weir's "Picnic at Hanging Rock": That the oneiric first act should've been the tone of the whole film. Hadzihalilovic does just that with this one, although in a more subdued and ambiguous manner, with a touch of "The Handmaiden's Tale" in keeping with the film's source material ("Mine-Haha, or On the Bodily Education of Young Girls " by Frank Wedekind).

Like her latest feature film, "Evolution" (2015), the film is a kind of dream, where the real is transposed to the unreal to depict the strangeness of oppression, a fairy tale where ignorance could be bliss. Throughout, details of sight and sound reveal unclear yet purposeful clues of the circumstances, which become progressively creepy despite the innocent appearance. The unseen is pervasive, lurking near the joy of hula hoops and swims in the lake and ballet classes. Behind the rules and regiments, the naive appeals to obedience, and the meticulous repetitions of timing and uniformity lies a truth latent with violence and power.

This is a film that works because of the ways in which it evades explicitness. Meaning is felt as the end, yet never described by the means. You get lost in the search for knowledge that feels close to the touch. Your intellect is enticed with sensuousness, then abandoned in the cloud of unknowing. Naturally, allegory is the mechanism by which we can grasp the film's "statement," though the tone and plot lend themselves best to emotions.

But of course, the film is technically adept and crafted to perfection. Changes in style are modest yet tonally precise: once you're used to the stability of the static image, suddenly the view roams as playfully as the girls in the woods. The sound design is the most deliberative, providing most of what Hadzihalilovic calls the "latent menace" of the film.

"Innocence" (2004) is possibly my favorite film about children, certainly pre-pubescent girls—which, on the face of it, sounds creepy as well, but that's part of the point. Girls have been bred into a kind of prescribed womanhood, defined by the silhouettes of distant men, which provokes the desire for autonomy and individual choice. In short, it's easy to reflect on the film with the vernacular of feminism. I admire any film that respects the minds of children, especially their desire for freedom and fruits it produces for curiosity. By the film's end, I felt a tragedy that was about to bloom, like a caterpillar's metamorphosis into a butterfly that'll die and be pinned to a display, a fetish for science and lust.

Fun trivia: the girl who plays Iris suggested a title for the film when it was discovered that another "Innocence" would be playing alongside it at a film festival; her suggestion was "Weird Resuscitation." I like that quite a bit.