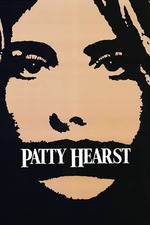 I streamed this on the Criterion Channel recently. Not bad. I have some selective thoughts about it…

It's a bit different than director Paul Schrader's MISHIMA: A LIFE IN FOUR CHAPTERS, but I thought about it while watching HEARST. Both deal with historical political figures and events and explore the extremes of ideology. MISHIMA is an art film through-and-through, HEARST is an aggressive, politicized crime thriller/biopic. Yet HEARST gets artsy too: it features constructed sets, designed to represent Patty's state of mind as she's being brainwashed and radicalized; other sets include a room, seen from above, surrounded by black space; Patty's POV in confinement is a visual motif of the film's "first chapter"; much of the editing is fast and includes mixed footage, which seemed like a less-hyperactive precursor to films like NATURAL BORN KILLERS.

The acting is likely to get mixed reviews. The cast is made of many who've starred in A-list productions, and yet the performances are quite unconventional. Everybody in the SLA (Symbionese Liberation Army) is in a heightened state, always speaking in declarative tones. Like many films about militant commies, the radicals are represented mostly as ideologues. Obviously that's what they are, but ideologues are humans too. They don't spend ALL their time expounding ideology or being totally hypocritical. Whether or not this is "fair," it creates several characters who are completely strident. In this way, HEARST shows how self-destructive political radicals can be when the world around doesn't affirm their stridency. The insularity of living in an enclosed terrorist cell is strongly demonstrated.

PATTY HEARST is something a little different by Paul Schrader. It does have an edge to it, so it isn't tame, nor is it "Hollywood." A crime flick infused with the mania of revolution.

Other films that come to mind: Nagisa Oshima's NIGHT AND FOG IN JAPAN, Koji Wakamatsu's UNITED RED ARMY (or his "pinker" films like ECSTASY OF THE ANGELS), Uli Edel's THE BAADER MEINHOFF COMPLEX, and Olivier Assayas's CARLOS.