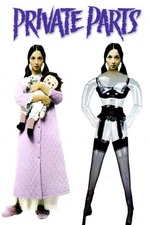 By 1972, I suppose studios were willing to cash in on the endlessly reusable form of PSYCHO—and the common correlate of pathological photography—with the sexual quirks and indie-spiritedness of something like THE TELEPHONE BOOK. PRIVATE PARTS has this genre familiarity to it. It's mostly successful with its formula. Production value gives it a pretty boost.

The ending is mired in clunky trope mixing, rather than adding something new or, at least, making the full finale sensible and distinct. But the buildup is that great kind of oddball murder thriller that has more charm than pretension.