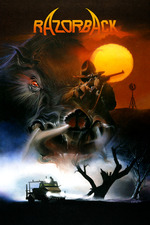 Iconic Australian films can't help but flex their Oz-ness. It's that outback: the formidable expanse, a harsh terrain dominated by the wild, yet populated by greasy blue collars whose equipment and fashion always appear prepared for life after the apocalypse.

RAZORBACK leverages the land like a narrative series of incredible imagery; a wide shot revealing the distance from a truck to a hilltop, a wet pit full of soaked refuse, rust upon everything, the vivid greenery of civilized territory, a borderline steam-punk canning factory displaying vibrant red carcasses, and interior decorating that resembles junkyard feng shui. It's no wonder a music video director took the helm.

It's an immersive and darkly beautiful world primed to unsettle an audience with natural terror. Predators live intimately there, while humans fight to find their place in it. This is a great way to translate JAWS: An abnormally large wild hog trots the red dirt on the hunt for mankind, like a Great White swims through the ocean dabbled by little swimmers.

That's all that RAZORBACK needs for its formula. Put relatable, simple people in this world unmade for them and watch them survive against a significant beast. An ideal mode of respectable, action-packed entertainment.

And that's all that really needs to be said about RAZORBACK before you watch it. It's not without some faults (hasty editing, a few abrupt turns in plot, moments that test your tolerance for bad decisions). Some audiences might feel that intellectual elaboration on the brutality of existence is lacking. Regardless, RAZORBACK elaborates its themes with action. It isn't the least bit pretentious. Just the physics of fight-or-flight in a violent world amid an enchanting, dangerous landscape.