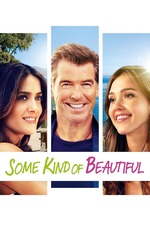 Some Kind of Beautiful

Who was this movie made for? It feels like a generic rom-com, the kind that’s marketed to women, but it’s tale is from a Male Gaze. Is it a noble subversion of a commercially “genderfied” genre? Not at all. So what is it?

It’s a bizarre attempt at multiculturalism. Each character represents a national identity, the kind that takes too much pride in territorial origins. These “archetypes” are pitted against one another, confronting the stereotypes each have about the other. It’s a comedy of xenophobic manners. Everybody is an asshole, so the viewer feels safe in seeing the worst that the represented countries—UK, USA, and Mexico—have to offer.

Most represented is the UK: Pierce Brosnan mocks US Americans’ improper English, their Puritanical solution to consuming alcohol (Alcoholics Anonymous), and the Millennial indifference to Romantic literature. Jessica Alba, the US American, doesn’t combat proper Englishmen as much as she embodies the corporate ditz; her concerns are about mergers and acquisitions, not the Humanities. Salma Hayek, the Mexican, is a bad driver—because she learned to drive in Mexico, one of her jokes—and Sofia Vergara caricature. She’s the hot object of Brosnan’s attraction (Alba plays his wife; divorce is proceeding). Those two feed off each others’ prejudices the most. They give us plenty of uncomfortable bad jokes, including one at the expense Tourette’s, which, I confess, had me laughing quite a bit. I gave myself a Hail Mary for social justice after that one.

As the conflict enters the third act, the xenophobia is contrasted with the plight of immigrants in the melting pot of the USA. As underdeveloped as this point is, it adds some humanity to the story. Pierce Brosnan, a privileged man, faces the same circumstances as the marginalized groups of Southern California. He is forced to take public transit with all the black and brown people, because he got a DUI. He has an uphill battle against immigration enforcement (kudos to the filmmakers for depicting an Immigration and Customs Enforcement officer, today’s Brownshirt for Donald Trump’s presidency, as an authoritarian idiot). Cannabis possession is his ultimate downfall. After being deported back to London, he flies to Mexico and catches a ride into the US with fellow border crossers to save his family.

The redeemable aspects end there. See, Brosnan (I don't remember the characters' names) had a son with Alba, one of his students back in London, which led to their marriage. But, before Alba dropped the pregnancy bomb, Brosnan had been womanizing Hayek, Alba’s sister, at a bar before the three had dinner together. Yikes! After the couple moved to SoCal, Alba cheats with a Hummer-driving hunk. The poor girl was simply too young to see Brosnan for the sexually infelicitous man he was. Hayek’s hubby dumps her eventually—see the true romance that awaits us? Yes, that match made in heaven is the end-goal for our misogynistic protagonist. The perspective of Brosnan’s and Alba’s son is mostly ignored until the final punchline, in which Brosnan finds the solution to his immigration problem: He is going to marry his son’s aunt. It’s an awkward admission. Then, everybody laughs and hugs on a beach dock, as the camera veers off into the sunset.

Despite the jabs at the USA’s drugs and immigration policies, this is a typical disposable comedy. Watch it for its failed decency.

There is one scene where Brosnan attends his second AA meeting and mocks a fellow Alcoholic’s fresh recovery. He gives a fake “woo-hoo!” with an exaggerated fist pump. It’s so disrespectful, I loved it.