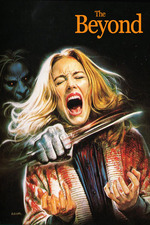 My sister got a new flatscreen TV, around 40 inches I think, Samsung LED. It's an improvement from my smaller Sony Bavaria LCD. Basically, I want to rewatch my blu-ray collection, because it's apparent that the Samsung is better suited to handling the bits of blu-rays.

There's more information all around: colors are distinct and vibrant, each object moves with stability, movement is fluid, all types of gradations—color spectrum, clarity, shades of shadows, and motion—are defined with natural brightness that maintains the best contrast.

So, imagine seeing a great looking movie you love and know get this treatment. How about one that was directed by a distinguished visual auteur like Lucio Fulci?

"The Beyond" is full of signature Fulci stylings that pop-out of this new screen: long takes that zoom, pan, and track to tell a story and show steps of action; those techniques used simultaneously to guide the camera's eye to an object or direction, or to draw a path; the creeping pace of these shots and the rest of the montage, often accompanied by the sound of nothingness or atmosphere; shifting points of focus that emphasize the depths of clarity; the dynamic of mounted and handheld camerawork; dense textures layered by the grain of filmstock; gruesome special effects that portray artifice and surrealism. The kind of details that HD restorations and presentations aim to illuminate. That focus trope could double as a demonstration of the TV's abilities.

A visual motif I recognized in this viewing was the presence of blue objects within the earthy surroundings: a lamp, vases, a bucket, a wet plank in the underground passage, attire like blouses and jeans and jackets. Unique items emphasized in dissimilar settings. Blue recurs in the lighting too: a segmented window shines blue into the monotone hallways of the hospital; blue lightning strikes in the watered basement; the autopsy room vibes a blue aura during a zombie attack. The blue then fades into a gray beyond.

I loved the movement. The muscles of mouths during speech. The flow of watery blood. And the spiders were scarier. The way they moved was frightening, like furry face huggers in a measured slog.

How many times have I watched "The Beyond" this year? It's been the new favorite to replay, usually during bedtime, or to tap into and understand better the idiosyncratic rhythm of the narrative. This repeat in a new presentation strengthened my admiration of the film; it climbs the ranks after each viewing. Although, it's becoming familiar, not as mysterious and confounding as before. "Zombie" used to be the only Fulci film so close to my memory.