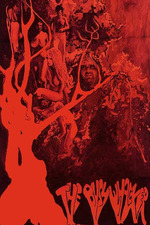 Obviously, you’re in for a super low-budget, tasteless treat. I wonder how many words such a film is worth, but, of course, that means I have to say more about it.

“The Bushwhacker” is a softcore roughie from the late 1960s. Roughies were, well, “rough.” Sexually. The intersection of sex and abuse presented simplistically and effectively to civilization. We in the 21st Century take for granted that with a few clicks we can find the same thing from the privacy of our homes, but imagine a cultural milieu where that’s not possible, when your morbid curiosity had less commercial opportunities for satisfaction (or whatever psychological end state you would’ve preferred). You had to be in the right “networks” of space and time, more broad yet particular than one node that connects to the rest. Sometimes, you had to get on your feet and search the streets for…”The Bushwhacker.”

And what was that? In this case, a small group of survivors from an airplane crash must find their way out of a sizzling desert, while a violent wild man tracks down the women to kidnap, tie up, and torture. A simple survival story, not unlike hillbilly horror. It is mixed with sex, of course, but not because the climate is a metaphor for the human condition (hot on the outside, hotter on the inside, amirite?!). Sex was the main product that producers and advertisers focused on (which doesn’t represent the scope of audiences’ interests, of course). In the feature length form, it’s padded with boring do-nothing scenes, which, in the grind house setting, was the time for audiences to talk and do whatever until something exciting appeared onscreen (in short, watch “The Bushwhacker” with friends and drinks and drugs). The “excitement” comes later in the film, when the audience is subjected to misogyny and torture. For the connoisseur of unhinged filmmaking, this kind of film has a lot of value: historical, aesthetic, oddball. You have to want to get weird. We’re in the realm of transgression.

From my hindsight, it’s interesting enough to wonder what was extreme for the late 1960s. Given the “dated” quality to every aspect of this film, it provides some safety, because of how “distant” we will feel from it in 2019. The tone is over-the-top, cartoonish. Everything is facetious, politically incorrect. But as is often the case with hindsight, the past proves to be more than we expected. Torture is torture, even in the late 1960s. As long as you have a cast and crew that are willing to push it to the limit, you will likely feel yours eyes widen, your mouth drop. Violence looked “good” back then. There had to have been some real blood—our Bushwhacker grabbed some branches from a bush and whacked a woman’s back. I wonder where the actress was hired. Hopefully, she wasn’t underpaid. And that’s just the first major torture scene. The final one is incredibly disgusting and scuzzy, yet you’re likely to laugh. Call it torture porn comedy.

An acquired taste, but it’s exemplary of trash cinema. If you like trash, you can’t go wrong with this one (the low rating here shouldn’t make you dismiss it). For collectors, this film is on blu-ray, paired with another softcore roughie, “The Ravager.” It’s a wonderful double bill.