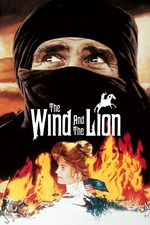 The Wind and the Lion

I'd love to know the background to the creation of this movie. How much of it is John Milius? Was the studio's grip strong enough to alter the entertainment value of the direction?

The style is different than "Dillinger," but it deals with the same subject: the myth-making of Great Men, as they see themselves. The depression-era bank robber crafted an image as a folk hero, while the man on his trail, FBI chief Melvin Purvis, used state power to project his performance of heroics. Both men competed on the ground and in the headlines. It was a battle for American Masculinity and the stories that would follow.

"The Wind and the Lion" goes further by using a cinematographic language that'd so-called great men would enjoy, like casting a bankable leading man in a role that doesn't resemble his ethnicity or voice (nor does it suit his skills), John Williams's non-diegetic compositions of triumph which lack a tone of irony and tragedy, and action scenes staged in the adventurism of an Indiana Jones sequel.

Yet, the film is not without cynicism. It's honest about the US' expansion of imperialism, and the influence of honor as both an object of devotion that affects reality, and a mission creep toward greater violence. This is why I want to know the extent of Milius's creativity. He didn't make the army despite voluntary enlistment (i.e., is Conan the Barbarian envy?), yet he scripted "Apocalypse Now" (boundlessly bleak—but did Coppola have the darker heart?). He's like a self-aware version of Yukio Mishima: he wants the spiritual elation that wartime honor seeks, yet he knows it leads to nothing more than death, conflict among "great" powers.

Or, that it's a cover for a bankrupt character. When Samuel Gummere, the American consul to Tangier, Morocco, meets with the command of the Atlantic Squadron, he mentions Roosevelt's victorious gallop with the Rough Riders on San Juan Hill in Cuba. It's a fabrication peddled to sway their diplomatic strategy to benefit the image of the most popular president—in 1904—since George Washington. The movie doesn't dwell on this story, but in the real world historians like Jerry Tuccille have uncovered the deliberate underrepresentation in history of Buffalo Soldiers (black soldiers) who did most of the heavy fighting in that battle (and the Spanish-American war). Roosevelt actually charged into an ambush and needed a rescue by black infantry. Later, Roosevelt straggled up a hill after the final fight and confronted those reporters, depicted in "The Wind and the Lion," who followed him to assist his self-promotion. Over time, Roosevelt minimized the Buffalo Soldiers in his accounts of the fight and described them with the generic racism of his time.

The movie is more interested in Roosevelt's dead grizzly bear and the memorialization of it as a fearsome beast—stuffing on a platform—which bolstered the impression of the president's bravery in the public eye (then there's the iconography of Raisuli and macho Islam). But this is in the same spirit as recognizing Roosevelt's media manipulation about San Juan Hill. It is the greater point of "The Wind and the Lion," which is cheapened by the "epic" entertainment in the rest of the film...which is still enjoyable

Songs From the North