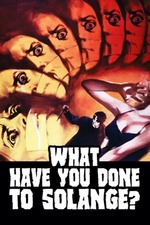 What Have You Done to Solange?

This went down a notch or two in my Gialli ranks, but I realized that there may not be a perfect Giallo. My top spots make a constellation, if anything, of the tropes and qualities of the genre, instead of placements won in strict competition.

"What Have You Done To Solange?" has good storytelling, distinct and relatively developed characters, is notably melancholic, and is perhaps the best example of the London-set Gialli ("A Lizard in a Woman's Skin" comes second, because it has bumps in the plot and opaque explication; Lucio Fulci's direction kicks ass though). I like the pacing and I respect the plot changes ("respect" is a pertinent word, because so many Gialli are arbitrary and cheap).

The "social commentary" is fleshed-out without feeling like a message, more than a thematic backdrop for lurid imagery (I take both approaches, usually). There are several vantage points in the allegory that hinge on events in the story. It amounts to something interesting and thoughtful: an interplay of sexual liberation, successful romantic bonding, and reproductive liberty, and the obstacles against those in a culture of monotheistic patriarchy, among other cliques and hierarchies.

The look of the film is more austere, commercial and quick, but not bland per se. It's more like Sergio Martino, not Fulci or Dario Argento. It's a '70s movie, and thus a Gialli movie. The fact that the movie isn't as visually unique or technically daring is a motivation for reducing its spot in the "rank" of Gialli.

So, which titles are included in the greater Gialli constellation?

"The Bird with the Crystal Plumage" founded the main mass-produced giallo format of the 1970s, while exhibiting storytelling better than the average gialli. This holds true for the rest of director Dario Argento's filmography: "BCP" is his best narrative, despite preceding his stylistic development.

"Deep Red" is the "BCP" format with improved and original aesthetic treatment. Like "BCP," "DR"'s qualities are representative of the genre and Argento's artistic growth. We're seeing something like a Brian DePalma of Italy, or a second-generation Mario Bava. But "DR" also exemplifies the red herring template of most Gialli. The story is for the sake of murder set pieces; but these scenes have perhaps best deaths in the genre. The shallow psychoanalyzing serves best as concepts aiding a tone of disorientation and dread, perversion and murder.

"Blood and Black Lace" has the best form of all Gialli. Minus a few lazy moments of quick explication, the "chapters" and corresponding pace work very well. The point at which most Gialli wrap up the story and end the movie with a kill becomes a narrative climax that pushes the viewer over a steep precipice, into a slow free-fall. Mario Bava's interest in greed and private Machiavellianism is elaborated by romance and survival ("A Bay of Blood" and "Rabid Dogs" are later examples of these ideas). And like any Mario Bava film, it looks stunning. A masterwork of style that became that basis of Argento's "BCP" and the production line of Gialli it inspired.

So far, this is how the top tier of my Giallo pyramid looks.

That Most Important Thing: Love