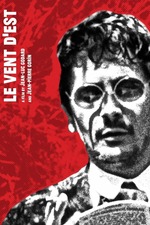 Wind from the East

Ideological training by a cheap, self-reflexive art film, basically. (Will Arrow Academy be responsible for a new generation of Marxist-Leninists? Let's hope not.)

It's exemplary of a style of Marxist thought in a period of socialist discourse that's valuable to the scholar of political history and ideas. The concise presentation of Marxist assertions allows the scholar in the audience to learn quite a bit of rhetoric and analysis in a shorter time than they would slogging through dense texts that nobody wants to read.

Like the other films I've seen from the Dziga Vertov Group, "Wind from the East" is very didactic and oozing with paternalism toward the working classes which nonetheless were absent from the cast and crew. I do want to know what union members and real workers thought about ideological films like these, if they ever watched them. I imagine many adults leaving the screening impatiently and getting to their own drawing boards.

"Combat the bourgeois concept of representation."

Ironically, the opposite has happened. Film markets have expanded all over the world, entailing domestic and foreign features for distribution within developing states. The Third World has strong film communities devoted to productions from the West and the rest. In fact, a majority of users here on Letterboxd and members of other cinephile groups on social media, all from the nations boosted by globalization, reflect more of a entrepreneurial ethos than that of spoiled revolutionaries. Communists have not convinced these people.

"Excuse me for interrupting your class struggle..."

Indeed. The Dziga Vertov Group wants to challenge the alleged dominant ideology inherent to those films made by the owners of the means of production, the master class of material means. But rather than embrace their drama class field trip performance, you'll want Hollywood. It's like watching footage of industrial meat packing and craving a burger anyway.

Since self-critique never seems to work, take some criticism from an outsider instead: "The Bourgeois Virtues: Ethics in an Age of Commerce" by Deirdre McCloskey. You'll gain greater insight to the temperaments that improved the world. Ditch dated social theories.