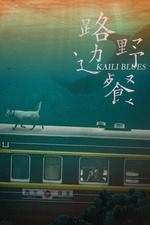 There’s a notable focus here on movement, one that, aside from standout virtuoso stuff like the mid-movie long take and all the obvious roving camera acrobatics, also manifests in more contemplative moments, often just vehicles cruising along mountain roads, asphalt unspooling in front of or behind them. The cumulative effect is less about the fates of these specific characters - I pretty much lost the thread of the story while getting sucked into the finer textural aspects about halfway through - than a patchwork quilted portrait in which these people serve as means of knitting different locations together, the narrative needle drawing the film’s visual thread.

This is admittedly communicated most effectively in that single take, which sends characters in different directions in the interest of covering more ground. What ultimately results is a portrait of Guizhou as a verdant would-be paradise that’s nevertheless perpetually held down by some ineffable force of listlessness, its fog-wreathed, ethereal environs occupying two distinct spaces at once, fully part of the entrepreneurial modern China while also stuck in its agricultural past, at least some of that fixedness having to do with the nursing of old wounds. Comparisons to Weerasethakul and Zhangke are therefore spot on, not just because of formal similarities, but in the core story mechanics. Bi borrows Joe’s concept of wreathing political horrors inside of ghost stories and folk tales, Zhangke’s prevailing fixation on the spectral after-image of economic achievement.

Here, those two inspirations coalesce in the presentation of the Miao, an indigenous ethnic minority (one of 55 such groups occupying China’s wide-ranging territory), whose culture seems to sit on the cusp of disappearance. In this atmosphere, the central quest to recover something precious, first the missing nephew (a symbol of the future), and then a band who can still play the culture’s traditional flute (a vanishing past) creates the sensation of a character, film and society being pulled in both directions at once, a feeling the film marvelously expands upon by compressing past and present into a single haunting dream-space.