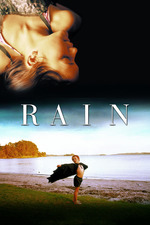 Rain is a New Zealand film, the debut from director Christine Jeffs, whose excellent Sunshine Cleaning I saw last year. It's a very atmospheric piece of cinema that created a wonderful mood and evocation of place, set on the coastal mudflats of NZ's north island.

It follows a family on the brink of separation as they take one last holiday together. Janey, a girl on the verge of womanhood watches her mother flirting with an attractive local boat captain Cody, and becomes infatuated with him. Meanwhile, her father and mother both sink into a mire of alcoholism, and Janey spends her days entertaining her young brother Jim and fending off advances from a local boy.

It's very much about the pace and atmosphere of this film. The location is wonderfully shot, and manages to beautifully capture some of the lassitude of the family dynamic at the time. The story is revealed in a rolling exposition—it's never plot-driven, and yet as it progresses, we see what a rich and interesting tale has been woven behind us. It shows the skillfulness of Jeffs' direction that the film is so subdued and yet so artful.

There are some minor drawbacks, even so. Some of the performances are quite patchy. In particular I found Alicia Fulford-Wierzbicki's dialogue rather stilted as the teenage Janey, although her body language was a good fit for the languid pace of the film. Indeed, all of the acting was a little stilted—to a certain extent this didn't matter in the context of the mood of the film, but I wondered if some of the dialogue was to blame.

Overall though, I found it a very satisfying piece of cinema. I absolutely went along with the mood of the film, and found it an enveloping and immersive experience. I will continue to watch Jeffs' films with great anticipation.