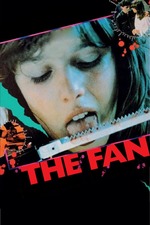 Worth the price of admission to Celluloid Screams 2013 alone, an ultra-rare screening of this German tale of teen fantacism on 35mm.

Before this started we got an introduction by author of 'House of Psychotic Women' Kier-La Janisse who got us up to speed with the basics of what was to come. We were then treated to the extremely tough and strangely sublime ANGST, PISS AND DRIDD, a short film about a killer couple which goes to tough lengths not to gloss over the mental illness aspect of this life. Harsh but so worth it.

So on to this magnificent film.

Desiree Nosbusch plays Simone, a young teen who is a huge fan of a certain pop performer. Nothing unusual there really in itself. She guides us in the early stages through a voiceover (dubbed in the version screened) as she describes her love of R, the synth music sensation. Her love though is quickly revealed to be obsession and things unravel in ways I truly never expected and had me in the palm of its hand throughout. Nosbusch is incredibly believable in this role and is required to do stuff in the film which might have many questioning the ethics of the makers given she would have been 16 or 17. Dubious or not, it is startingly effective. Few performances of mental illness have shaken me to the very core but this stubborn brainworm of a film lingers despite rinsing it with a few other horror films since.

I've been purposely vague regarding the plot because I went in knowing nothing and that definitely aided the film, not knowing what the paths ahead were exactly.

It would be great to dissect the 2nd half of the film and discuss the pertinence of it all still all these years later. I'll leave that until another day if this gets a release of some kind in the future.