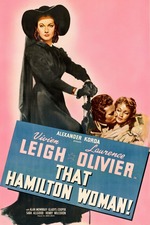 Churchill supposedly screened this in the double-digits for the hortations on besieged empire back when subtext was blunt, serious business. The first twenty-odd minutes betray haste of production—the editing's clumsy and the lighting makes the Hamilton digs look more stagey than luxe. Then everything comes together in sweet flows of draping, silhouette and Maté glow within Alexander Korda’s rather foursquare direction. (There are twenty medium-closeups of Leigh that’d make you turn a ship around and head back to Naples, too.) And in the end, dwelling on the seams and occasional chintziness—see Olivier's terribly low-rent entrance—is uncharitable when faced with Vincent Korda’s evident industry and excellence. But what keeps you in the game is Leigh: for her force and demonic focus (when she busts someone in the face, he stays busted); for the microscopic hitch in her voice when she gropes for “phenomena” and her sudden yell of, “Raise the stakes!” You don’t want ten minutes of the Battle of Trafalgar and the dead Olivier lit like the Christ: you want her. Even if, like me, you haven’t revisited the film in an age-and-a-half, Leigh’s ferocity and bearing—her Leigh-ness—might make you, too, feel like you’ve been kissed through two centuries.