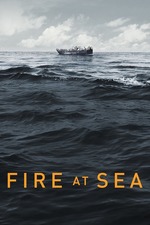 it's been a while since I've seen a film which achieves such thematic urgency and relevance, formal audacity, and emotionally devastating final sequences as Fire at Sea does. it's a tough but necessary film.

this incredibly timely quasi-documentary about the European migration crisis uses the juxtaposition of the harrowing journey to a safer land against the banal and ordinary lives of that land's current occupants not as a cheap gimmick, but as a way to remind the viewer of their willful ignorance of the struggles facing the many people who flee Africa and West Asia for Europe. that the dominant focus is on the daily routines of an ordinary, though charismatic, young boy in Lampedusa and not the countless stories of the migrants reinforces the feeling that most of us choose to look away from the issue and continue our lives with normalcy, as does the revelation of the boy's near-blindness in one eye. but when we are shown the perils of the journey the refugees endure, there is no ignoring the truth; Gianfranco Rosi presents horrifying images with such frankness and boldness that the urgency of this crisis is strongly reinforced, yet without a moralizing and heavy-handed agenda. he begs us to ask, "what is the contextual reality of my individual struggle? what am I to do about this problem? should I sideline my own life to become an agent of change, and if I should, am I capable of that?" Rosi's approach would feel objective and apolitical if the film didn't make clear how much compassion he has, and we all should have, for those migrants who face dehydration, disease, and death for an opportunity to escape the extreme persecution and suffering which has become routine in their homelands.