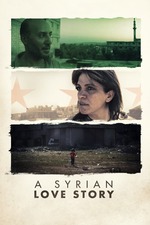 A haunting and emotionally draining experience. A story that's heart-breaking because it's so human, and how such mundane problems can hurt us as much as seemingly apocalyptic crises.

There's a reason this is called A Syrian Love Story, because it is a story about love with the Syrian crisis as a backdrop. If this was a fictional film it would have felt melodramatic and over the top, but because of it's documentary format, we see the emotion raw and up close, and how drained and defeated everyone is by the end. This is barely bittersweet, it's bitter and draining and depressing with maybe the tiniest glint of hope for these people in the future, though we know the emotional baggage and mental torture will follow them forever.

It would have been incredibly easy for Sean McAllister to make a film centered on the crisis itself or on his own imprisonment in Syria during the production of this film, but he keeps it grounded by having it truly be a love story and keeping it that way.

A Syrian Love Story is an incredible achievement in documentary filmmaking, emotional non-fiction storytelling, and is the best film of 2015.