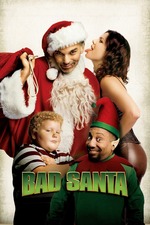 Bad Santa was very controversial when it was released in 2003. Many parents were shocked and appalled at the level of profanity and sexual references, taking their kids to see a film that they thought would be a fun Christmas flick. Apparently the R rating and the big warning sign on the poster stating the film was explicitly for adults wasn’t enough. This didn’t seem to affect the film’s box office return though, as it made just over $76 million. The controversy was never taken that seriously by fans of the film, and it had plenty of fans. It had it’s fair share of critics too, but the overall reaction from reviewers and audiences alike was very positive.

Willie (Billy Bob Thornton) is a deadbeat con man who each year along with his associate Marcus (Tony Cox) gets a job as a Mall Santa, and rob the store once the season is over, made especially easy by the fact that Marcus is three feet tall, which is very handy for crawling through vents and hiding from guards. Willie is the safe-cracker, and together they pull a heist on a different mall every Christmas. On the latest job, Willie meets a kid (Brett Kelly), who seems oblivious to anything ‘Santa’ does, including attempting to rob his house. He also meets Sue (Lauren Graham), who quickly becomes his girlfriend. Willie stays with the kid, as he and Marcus get ready for the heist.

If you watch this film with no prior knowledge of the controversy, it’s not really all that shocking. True, the level of the profanity is shocking at times, but that only serves the comedy. And Bad Santa has comedy in bucketfuls. As mentioned above the film is rated R (15 in the UK), and for very good reason. It’s a very adult flick, with violence, alcohol, smoking, swearing (and tons of it), and sex. It serves as a break from the child oriented Christmas films, and it’s a great film to watch after the kiddies have gone to bed on Christmas day. However, the film does a really good job of capturing the spirit of Christmas in later scenes, as Willie redeems himself of his ‘sins’, and actually starts to care for other people, most namely Sue and the kid.

As the film goes on, it starts to get darker and edgier, with one scene standing out in particular as violent, and one that was cut from the theatrical release. True, the film is dark and edgy all the way through, as it’s probably one of the best examples of a black comedy, but it takes a very grim turn towards the end, making us actually care for Willie, which has been a very unlikeable character throughout the film. It does a good job however, of making Willie something of an anti-hero, as although he’s a horrible person, we do see that it was the product of an awful upbringing and just wasting his life away in alcohol. The audience can’t help but feel sorry for such a hapless person, and some people have even gotten teary-eyed towards the end.

Overall, Bad Santa is an excellent movie. It’s very, very funny, the script is witty, the acting from Tony Cox and Billy Bob Thornton especially is phenomenal, and it actually captures the spirit of Christmas: joy, redemption, and love. Bad Santa is a great Christmas film for the adults, and may be one of the best black comedies ever made. Just make sure the kiddies can’t hear it.