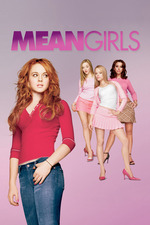 Let me tell you something about Mean Girls. I thought it would be crap. I know, right? It's so embarrassing. I don't even... Whatever. So then about about eight months ago, I saw the ratings for it and so I started the movie with the assumption that it would be totally awful but then I started howling with laughter, and my other movies were like, weirdly jealous of it. Like, if I would skip past them to watch Mean Girls, they'd be like, "Why didn't you watch me?" And I'd be like, "Why are you so obsessed with me?" So then, for my birthday party, which was a marathon of my favourite comedies, I was like, "other movies, I can't invite you, because I already have Mean Girls." I mean I couldn't have some other movie at my party. There was gonna be *Mean Girls*. I mean, right? It was one of my FAVOURITES. So then I sold some DVDs to buy this DVD and started watching it all the time, it was so retarded. And then I was watching it constantly because it was so quotable, and then I went to a quote-along in the fall, all of the people were massive fans and it was totally awesome, and now I guess it's my favourite comedy.