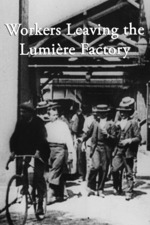 Produced by: The Lumière Brothers.

Perhaps one of the most important minutes in the history of cinema, La sortie des usines Lumière is the first official film of the auteur filmmakers Louis and Auguste Lumière, and the first ever to be screened to the public.

The story goes, though I cannot speak for its accuracy, that on the 28th December, 1895 a relatively small group of 33 people (out of a possible 100 tickets that went on sale) gathered at Paris's Salon Indien Du Grand Café to witness the Cinématographe, a newfound invention from The Lumière Brothers. Most turned up out of curiosity, assuming it to be another photographic image projector. What they experienced in utter astonishment was something different altogether – a moving picture.
Can you imagine the awe?

The film follows the simple narrative structure; beginning, middle and end – by showing workers (actual employees of The Brothers factory in Lyon) leaving a hard day’s work at the factory. The camera observes from a stationary position, capturing the many faces as they pass by. Like much of The Brothers filmography, La sortie des usines Lumière depicts an actuality, though the workers are obviously trying not to look at the camera.

Whilst one must maintain a sense of period and place, and observe inadequacies as being a product of film’s early experimental nature, that besides this is easily one of the most important films ever made. The Lumière Brothers began here, and, in many ways, so too did film.

VERDICT; When the doors first opened to the Lumière’s factory, so too did the avenue to cinema, to a whole new era of history. A magnificent stepping stone upon which the industry was founded.
4/5 or 8/10