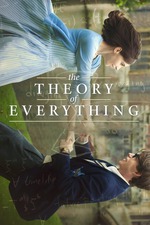 “Oscar-bait” has become a pejorative term if there ever was one. The Oscar-bait accusation has certainly been lobbed at The Theory of Everything enough times, but I found it pleasant, not completely pandering, and actually quite moving at times. Fine in every way--directing, acting, music, production design. But risk free.

It’s one of those invisible style movies. The camerawork is standard and not distracting, and the period production design is pristinely accurate English mid-century. This lets acting and music do the emotional work. I found the orchestral and piano laden score particularly effective, and though it is traditional, is among my favorite scores of the year. Other than a pretty neat ending conceit, I hardly noticed the camera or editing at all.

The Theory of Everything pulls some of the most notorious tricks in the biopic playbook: portraying Stephen Hawking as the natural but scrappy genius who can solve 9 of 10 impossible math problems in a morning; characters repeatedly have dinner conversations that generally explain Hawking’s work to the audience; and people give Hawking standing ovations on multiple occasions.

Despite the contrivances, the core relationship is compelling. Based on Jane Hawking’s memoirs, The Theory of Everything depicts the spring, summer, fall and winter of Jane and Stephen’s marriage. We see how difficult it was to maintain intimacy with his physical condition and her position as primary caregiver. We see how Hawking was kind of dick to his wife as she did so much for him, and he was reluctant to allow her help. We see how it’s sometimes hard for a woman to feel empowered when confined to a caregiver role. Not that the film pushes this feminist angle too hard, of course. That would be too much of a risk.