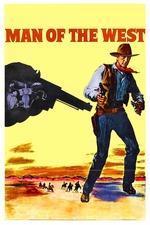 Man of the West

Surprising given the reputations of so many involved on this picture that it should fall so flat. From the writing to the pacing to the acting of Cooper, Cobb, & O’Connell, it’s an inauthentic misfire from start to finish. Most of the blame can go to Reginald Rose and Mann himself, who seems not to have shown up for the actual filming. Bizarre, as Rose was responsible for 12 Angry Men (his dialogue sounds like hokey silent era intertitles) and Mann did a fine job on ‘53’s Naked Spur, seen by me just 2 nights ago. As detailed as the ‘scope lensing is, Mann doesn’t really make much good use of it. Near to Cooper’s last film, I’m convinced he knew virtually nothing about acting, so fake are his moments here. He’d have been better off playing the entire performance taciturn, rather than make up feelings that were so obviously not genuine and demonstrate them for the camera. Cobb overdoes his usual gruff bloviating that makes his performance in On the Waterfront look restrained and is saddled with distracting old age makeup and a ludicrous wig in a failed attempt to make him look older than Cooper. Only Julie London manages to rise above the amateurism.

A Farewell to Arms