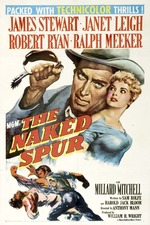 All in all, not a bad entry in the genre. A welcome relief from the general Ford/Hawks formula that had to have a dopey brawl to show that men were still men and could settle things with their fists and not always by their guns (at least until the climax), the even dopier musical interlude by mens’ singing groups such as Sons of the Pioneers or the Cousins of the Cavalry or whatever the hell they were, and the obligatory vistas of Monument Valley. Mann and his screenwriters focus on the psychological chess game the Ryan character tries to get his captors to play and how paranoia, ambition, greed, affection, and finally honor affect that game. Stewart is good but standard here as he was heading into the darker phase of his career. Mellor’s photography was sumptuous but this decent film needs a restoration. Kaper’s score is constantly getting in the way. Janet Leigh proves even at this early age she was one of the most skilled actresses of her generation, and puzzlingly, one of the most underappreciated. Meeker is okay here, showing promise, but he was unfortunately completely undone by the impossible script given him by Jack Garfein in SOMETHING WILD.

That Man from Rio