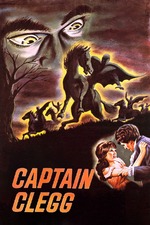 I don't really have anything clever or insightful to say about this film.

It's not horror, but horror-adjacent. Like the vast majority of Hammer films I've seen its combination of quaintness, age, and pastoral tone made this an incredibly pleasant watch. The stakes were not especially high for this film, and it hit all its marks.

Cushing, as always, is a treasure. He manages to always casually dominate a scene or a shot just with his mere presence. If you've not seen a Peter Cushing film, that may sound odd... but watch just one and you'll immediately understand. I would even call his small role in Star Wars (just re-watched but not reviewed) a "commanding performance" even though it's incredibly understated. His role in Clegg is charming, though, in addition to just being strong.

The Hammer woman, Yvonne Romain this go-round, is as always enchantingly easy on the eyes.

What I would have loved a good deal more of, though, are the skeletons on horseback. The flick could've benefited from maybe another 2-3 minutes of screentime for them somewhere in the middle. I'd also just like to see that footage looped into a reel of other clips to just have on in the background.