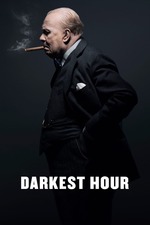 As I’m naturally inclined towards hatred when it comes to the political class depicted herein, I spent much of this trying to figure out my position on it — as a concept as much as a drama, which is perhaps down as much as anything to the difficulties of being fully absorbed into a dramatisation of a history that's been mythologised to the point of tedium. Instinctively suspicious of being "sold" something, I had to make a conscious effort not to think too much about the intentions behind making a prestige picture that lionises a dreadful man while invoking the national spirit that he encountered-encapsulated-mobilised-exploited-spearheaded-defended.

If this must be another Churchill hagiography, what might we glean from it? To what extent does taking a film like this on its own terms allow us to yield dramatic insight? As its title suggests, Darkest Hour is a kind of behind-the-scenes portrayal of the days leading up to a profoundly significant moment in recent British history: the coalition government’s decision firstly to evacuate Dunkirk beach of a desperately besieged fleet, and secondly to not enter into negotiations with Hitler, with Mussolini acting as intermediary. The drama unfolds through the prism of political intrigue: Churchill's difficulties are as much to do with his own war cabinet as they are to do with the limited options before him as a military strategist.

It's interesting to see how a sentimentalist like Joe Wright mounts a film around a man whose default approach to the job at hand is to be an obstinate juggernaut. Wright, no doubt aware that this history has been done to death, makes the wise decision not to hang about, imbuing his ticking-clock narrative with a surprising whimsy — from the bold onscreen inscriptions informing us of the passing days (one date descends out of frame as another descends into it) to the wall-to-wall score that accompanies every scene, right down to the climactic speech. It feels somehow less triumphal to put this final scene together without the kind of beats and silences and fragmented close-ups on faces in the crowd that The King’s Speech unashamedly employed. It's almost as if Wright can't wait to end the film, once Churchill enters the House of Commons; and ends it, indeed, as quickly as he began it, with a Wikipedia style summary of What Came Next (which oddly and comically refers to the British Prime Minister on first-name terms). Churchill’s entrance is delayed — like Groucho’s at the beginning of Duck Soup — and, with his most famous speech made, he stomps off: cut to black.

On the one hand — and I suppose this is built into the premise of a film like this — there's the attempt to demystify Churchill as a man and politician (showing us the contingencies behind a particular newspaper snapshot, for instance): just what fears, just what reservations, did the man harbour and express in those days prior to the speech in which he said we would fight them on the beaches, and on the streets? On the other, scriptwriter Anthony McCarten can’t help himself, framing the tensions that define the war cabinet's meetings as a standoff between good-faith representatives of the British people, acting selflessly on a country’s behalf and in its genuine best interests: surrender on one side and Churchill's refusal to budge on the other. Giving no hint of Churchill's own antisemitism, nor of his ambivalence towards fascism and the Third Reich (dictated by his absolute disdain for the left, which he shared with Hitler), McCarten and Wright delineate their protagonist's stakes as a kind of personal war not unlike Smiley’s in Tinker Tailor Soldier Spy. At key moments, here, Churchill will hear Hitler on the radio, or will be reminded of him by other means — and the mere sound of his eternal nemesis taunts him much in the same way that Karla does Smiley in le Carré’s novel and its two screen adaptations.

I recall Tinker Tailor perhaps due to Oldman, who played Smiley in Tomas Alfredson’s adaptation with an intelligent vulnerability. Heavily prostheticised, he’s the obvious reason to see Darkest Hour — if Acting is your thing — though it’s difficult to know what to make of a performance so heavily entrenched in the mechanics of imitation. And Oldman, good as he is, can’t do anything with a frankly terrible scene such as that make-believe sequence in which Churchill opts to take the London Underground (one stop east on the District Line!) to Westminster. The sequence in question has Churchill seek counsel in a carriage full of salt-of-the-earth citizens as to the course of action he should take against the Nazis. “They’ll never take Piccadilly!” quips the train’s sole black passenger, and the Prime Minister chuckles the line back at him, as if making a mental note to quote it at a later point (in the following scene, we discover that he wrote all the passengers’ names on his matchbox). Is this intended to be an acknowledgement of the popular antifascism — international in scope — that emerged in opposition to imperialism and the political class waging it as the war itself developed? Given the cursory reference in the film’s summary text to Churchill’s loss of leadership following the war, I presume not. Worse, the scene ends with Churchill blubbering. “Are you crying?” asks a young child. I laughed.

In other ways, the comparison to Oldman’s Tinker Tailor Soldier Spy is unfavourable to Wright’s film. Alfredson’s, set amidst the Cold War paranoias that Churchill’s second stint as Prime Minister helped to usher in, amped up the atmosphere as part of its narrative economy — which helped to both assist and compensate for its convoluted plotting. Darkest Hour is strangely slim on this front — a result, I think, of its synthetic look, its cold-palette high-contrast cinematography. All those overexposed windows bathe rooms in a kind of Downton Abbey chiaroscuro — one that, sure, we might read as a spotlight that Churchill/Oldman must grow to fill, but I couldn't help but wonder if the director was trying to strategise his way around showing anachronistic exteriors. That seems like an unfair criticism, perhaps (isn’t the lighting choice to do with the way afternoon sunlight would fill a large room in May 1940?), but then we have to contend with Wright’s evident laziness elsewhere, such as his cavalier — and atmosphere-deflating — handling of extras in the two House of Commons scenes that bookend the film. Pay attention here — it’s hard not to — and you see a bunch of fellas mistiming their reactions and their hear-hears and their general brouhaha to such a degree that I wondered if some of them might in fact be computer-generated.