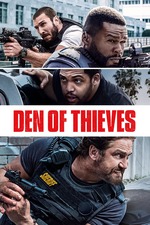 Heat meets The Shield, starring Nick Sobotka from The Wire (there's a bar called Ziggy's Hofbrau...). It has its moments, chief among them the tense post-heist heist (we are not watching what we think we are watching), though very little withstands scrutiny. I'd like to think the macho-ludicrous shooting-range scene, in which cop and robber size each other up like two guys standing at adjoining urinals, is meant to be a comment on the macho, dick-swinging ludicrousness of these kinds of films, but I'm not convinced.

I was enthralled by what I took to be Vernon, CA as the setting of the climactic shootout: a car chase "southbound on Alameda" with references to Slauson and Santa Fe. But the Alameda Corridor is trenched, and in the film the railroad is visible on street-level, so I had trouble mapping it against my memory of walking west of those tracks through that delightfully industrial non-city (also the setting of True Detective 2) in 2016. I also couldn't place the expressway that curves overhead in the film, so I did some map work and watched the scene again on a bad pirated stream; a fleetingly-seen background clue tipped me off: "New House Products Inc." Turns out the whole thing was shot in... Atlanta, Georgia.