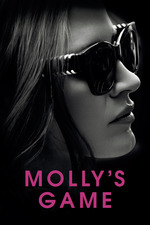 Inevitably thought of The Sopranos here—in particular, of "The Happy Wanderer", the second season's sixth episode in which Tony runs the high-stakes executive poker game featuring Frank Sinatra Jr. and others. There's even a character in Sorkin's film heavily reminiscent of Davey Scatino, the pathetic degenerate who can't play poker any more than he can win at it, but who keeps coming back for more.

David Chase's pilot for The Sopranos was consciously indebted to Goodfellas, employing a framing technique—the protagonist Tony Soprano introduces himself to a therapist (and us), telling her (and us) his story-so-far—so that it unfolds largely in flashback, with Henry Hill-style voiceover. Chase has said that originally he wanted to do the whole series like that—that Tony would visit Dr. Melfi, and reveal how he came to be where he is. Needless to say, Chase saw the light: it was an unworkable idea over anything beyond a 50-minute pilot.

I never watched The West Wing, or Sports Night, or Studio 60, and any reference I make here to Sorkinism, or Sorkinese, is limited to a kind of second-hand critical acceptance of what it might mean for a film to be 'Sorkin-like', or of what his 'style' as a scriptwriter is: fast-talking, super-articulate characters chatting to (and at, and through) one another... Molly's Game has all of that; and it has a framing device in which its rags-to-riches narrative (pre-empted by a rise and life-threatening fall down a ski slope) is told in flashback, with voiceover.

That's fine; I imagine it allowed Sorkin to play to his strengths, keeping him in a writerly realm while allowing him to branch out into feature-length directing. But the concept limits the material, where the narratorial mode is anecdotal rather than dramatic. That's fine, too, if the film isn't building to the kind of emotionally and dramatically tricky payoff that this one does, dragging in Kevin Costner as Chastain's father for some third-act psychiatry to retroactively rationalise (and psychologise) the film's events thus far. Costner gives his damnedest to pull it off, but this sort of thing requires more than a cursory talk-through of narrative incident. Like less incidental narrative, for starters.

Sorkin seems less confident as a director (I mean, I'm sure he is). Sometimes, in the Sopranos pilot, Tony's narration is at darkly comic odds with the actual material (he can't incriminate himself in the violence of the flashbacks so has to be euphemistic about, say, mowing someone down in his car). Here, I presume we're meant to take the literal dramatisation of Molly's narration—where simultaneously she tells us something and we see it unfold as corroboration—as a sign of her straight-talking, truth-telling disposition.

Fair enough, but that can get a little enervating over the course of 140 minutes, especially when the direction's default mode is a rapid-cut montage by which a whole world is evoked in the form of an info pile-up: when this happens a fifth or sixth time, it's the cinematic equivalent of an inventory, a list of things used to suggest a milieu rather than fleshing one out. I'd be less inclined to frame all of this as criticism if Sorkin showed for half a second any interest in directing scenes that need to be emotionally moving rather than merely snappy—such as that especially botched sequence in which Chastain answers her apartment door to a very bad man, and the whole thing plays out like a reconstruction from Crimewatch UK.