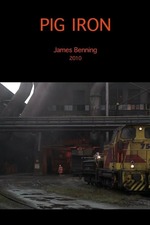 Benning does his thing: sits a camera atop a tripod and lets the action before it unfold. In this case, a train at a (since-closed) steelworks in Duisburg collects pig iron from a blast furnace; no cuts. Rust-shit browns contrast with hi-viz jackets and the orange-pink hues of the furnace itself; look carefully at the darker patches to the left of the frame (or at the puddles) and you'll spot the rain. Things happen: workers appear, the train pulls out of frame (and reverses back into it, then pulls out of it again), cars drive by in the medium-ground. It could be an hour long (like the final, weirdly rhythmic and even more weirdly unpredictable shot of Ruhr) or it could be three hours long (like BNSF), but the narrative-action completes itself within the given time. Indeed, the film lasts only as long as it needs to. But the smoke still billows, and the work will continue—until it doesn't.