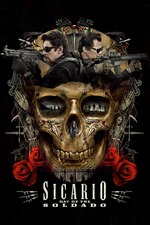 Had to spend energy early on to unmoor myself from great expectations following a recent rewatch of the first film, and found myself irked at the clunky mechanisms by which characters are re-introduced in order to get the two- or three-man gang back together—feelings compounded by some generic, half-arsed performances from secondary actors (and not just the hostage responding to satellite images of his family home being bombed, either, but the film's two primary Mexican teens as well).

Villeneuve managed to build a sense of mystery, then an all-encompassing dread, through an attention to peculiar, character-based detail: Brolin wearing flip-flops in a top-ranking inter-agency meeting, the fleeting POV shots of Del Toro as Blunt first boards the private jet, Del Toro tuning out and checking his phone during a team briefing. Here, early on, the frontloading seems somehow forced. Brolin (chewing gum) puts his feet up on a desk and reveals his pair of Crocs™ and you can almost feel the mechanics grinding away to assure us that this is a continuation not only of characters but of off-screen personnel.

It isn't, of course, not fully. Sheridan returns—with, as it happens, more weirdly expository dialogue than I can recall encountering in any other film he's scripted—but Villeneuve is missed. (Roger Deakins is missed/missing too, though I'm never sure how much a cinematographer is accountable for aerial drone shots; here, they seem rather synthetic and almost self-consciously globe-trotty in a way they didn't in the first film.) While Villeneuve had the confidence to let a key scene play out between Blunt and Brolin, right after that tremendous shootout sequence at the US-Mexican border, framed entirely from about 50 metres away, I don't recall a single directorial flourish from Sollima that might simultaneously draw us out (making us aware of the framing) and pull us in (enveloping us further in the dramatic stakes)—a tricky balance that, I think, played a large part in the first film's emotional power.

As a result, this at times risks disappearing into unchecked badass mode, especially late on, when Brolin appears to be suddenly playing a different character altogether. Come to think of it, one problem here might be the inability to delve deeper with these characters without in some way demystifying them. There is, at some point, going to be an inevitable betrayal of their 'essence': black-ops military men whose emotional impenetrability is also what makes them so horribly efficient as mercenaries in the employment of the US of A. Graver's third-act moral dilemma, countered by Alejandro's own paternal instinct, rings slightly hollow: a scripted convenience rather than true to character. (Alejandro's paternal relationship to Kate in the first film was countered by a horrific, final-scene ruthlessness; here, both he and Graver take it upon themselves to rescue a child they had no qualms with kidnapping just days before...)

It's interesting how a film like this engineers—and/or feels the need to engineer—a scenario (Sicario?) in which we root for Bad Men. I can dig it: there's something immensely satisfying, even seductive, in the way these professionals dispatch a bunch of amateur gunmen. And there are two exceptionally tense sequences here that, unlike the first film, pose a serious challenge to Graver and Alejandro. There's firstly an equivalent scene, if you like, to the border shootout of the first film, which plays out as an ambush on a dirt-road; and secondly, much later, when Alejandro finds himself in an impossibly dreadful, back-against-wall predicament with human traffickers in a lawless, interstitial backwater.

Spoilers, in the event the Letterboxd app didn't warn you... When Alejandro, head wrapped in tape and hands tied desperately behind his back, is actually shot dead, the film appears to have really gone for it: killing off its eponymous protagonist and the series' future box-office money-stream, while also underscoring the meaninglessness of his entire enterprise. It's a ballsy move that is simultaneously anti-cathartic and totally reasonable. And then he gets up, walks however many miles, grenades an enemy vehicle, and returns to full health for a one-year-later coda designed to tease at a third entry in what has become an unlikely franchise. Might the next one, starring nobody you've ever heard of, be... straight to DVD?