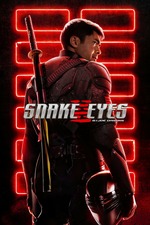 Frustratingly spotty movie! I’ll give it a like for the fun spots but I had some real issues.

The good: had a really solid look to it with engrossing, dark forests and narrow, neon alleyways. Knows when to put the camera right in somebodies face and let that emotion just pour onto the screen. Really enjoyed a lot of the drama of it too. Snake Eyes & Storm Shadow on inverted arcs of vengeance and anger is a great way to map out the story and especially early on it hits the beats well. I love a nuanced protagonist with an internal struggle I am connected to rather than the arrogant, quipster’s who have dominated blockbuster space lately. In fact I realized after the movie the reason I latched on to the drama so well is because of how little comedic relief there is and supporting characters are instead given solid material. Haruka Abe was especially good I thought and I hope to see her again soon.

The bad: the well choreographed action is too often shot in aimless handheld and edited haphazardly. Watching an action scene that does this is like listening to a band where the drummer is just completely off beat. I want to see what’s going on! Why is that so much to ask?! The franchising of it all is smothered on here in some sloppy ways and I feel like really bloats up the third act which already loses its dramatic clarity and it all becomes quite frustrating. Snake Eyes is responsible for what is essentially a massacre purely because I don’t think the movie understood how to get certain pieces into play. Samara Weaving has one of the worst action movie performances I’ve seen in a good while, delivering every one liner with a monotone thud. Úrsula Corberó is handling her lines much better but the whole design of her character feels terribly out of place and too goofy in the movie which is otherwise keeping its design somewhat grounded.

Really was hoping this would deliver and I’m surprised in the ways that I did but it’s overall too frustrating to want more of.