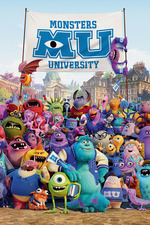 To be honest I really like the first 2 acts of this movie but the final act is dumb and adds plot holes to the first movie.

The last 30 minutes just ruin the movie because Sully changing the scare room to easy makes no sense. There are clearly cameras monitoring the room, even if they weren't facing the controls it would be easy to identify Sully messing with them.

Sully could just own up about Mike being not scary and he wouldn't have to be expelled. I know some may not agree but I think it would be a more powerful moment than cheating.

This movie also introduced two plot holes to the original movie, why has no scream canisters or doors blown up from the original movie. Boo laughing incredibly loudly that it turns on every door should also be powerful enough to blow a door right? Also during the scene where Randall gets dethroned from the two and Mike throws a lot of scream canisters shouldn't they blow up from the power of Sully's scream.

Also why has no one ever turned on a turned-off door from the inside in the original, that could of made Sully and Mike's escape from the snowy mountain a whole lot easier. They could just tell a great joke and turn the door on again.

Sorry guys, I know a lot of you think it's a good movie but that ending really ruined it for me. There's plenty of things I appreciate in this movie but overall I'm giving it a 5.