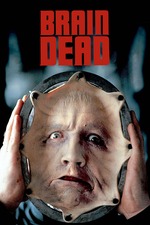 The most-liked review for this film on Letterboxd is somebody complaining that it is not Peter Jackson's Braindead AKA Dead Alive from 1992...

Instead it's a strange psychological thriller, born from a script that was in a heap of un-produced Roger Corman films, dating back to the '60s, picked up by his wife Julie, and directed by future Spielberg-rivalling Carnosaur maestro Adam Simon.

Everything points to it being a shoddy B-movie, and in some respects it is, but like the best of them, it's a film that has a lot of fun with it's internal logic, twisting and turning through it's story, yanking the audience back and forth, so we're never entirely sure what will happen next.

The story follows Dr. Rex Martin, a neurosurgeon who spends his days in a laboratory-come-storage unit, respectfully working on his brain specimens, that he seems to have grown more than a little attached too.

Old pal Jim Retson visits him one day, desperately seeking Rex's expertise. Retson is a seedy account manager for a major marketing company, and is in a spot of bother when the mathematician that has been working on his latest project suddenly breaks down with a bout of paranoid psychosis, forgetting those all-important numbers. Rex is intrigued at the opportunity of furthering his studies on live subjects, and so visits the patient - Halsey.

From there on out, it's a film that blurs the line between what is real and what is imagined. The tipping point seems to come during the actual procedure that Rex performs on Halsey, but there's hints throughout the movie at something stranger occurring.

I really enjoyed Brain Dead. Yes, it's cheap and schlocky at times, but it wouldn't be the same without that. And the casting of the two Bill P's - Pullman and Paxton - is a masterstroke that elevates the material beyond your typical midnight movie. Paxton is a delight as the sleazy Retson. It's a role he didn't play often enough. I've always thought there was more darkness behind those eyes than all the popular supporting roles let on.

As for Pullman, I like to think of this film as an early showcase for the paranoid confusion of Lost Highway. In fact, you could stop Lynch's masterpiece around the halfway point, as Balthazar Getty enters, and swap it out with the second half of this film.. all you'd need is a nice Badalamenti score, and it would probably work!

I'd recommend this to anyone.

Well, unless you're expecting Tim Balme, lawnmowers and zombies anyway.