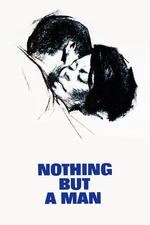 Nothing But a Man

Absolutely heartbreaking look at how racism of both systems and individuals slowly destroys African-Americans. It's an example of low budget independent regional movie making, far from that era's mainstream in both style and content. It's a beautiful-looking film with rich black and white cinematography that depicts life unknown to white people. I'm guessing it's accurate. It certainly rings true in its depiction of how limited the options are for a black man, particularly one branded a troublemaker by a local mill.

The film has a sense of tension from the beginning that only builds. Ivan Dixon smiles a lot in the first half, his expression a defense against the world's hostilities. There's little smiling in the second half. All the performances are good: Dixon and Abbey Lincoln are appealing as Duff and Josie, a couple that only want cozy domesticity; Julius Harris as Duff's father, Gloria Foster as the father's caretaker. She has a look that lets you know she's learned to not expect anything. Despite an ending that chooses to hope rather than succumb to despair, it's one of the most depressing and bleak films I've seen. Essential.